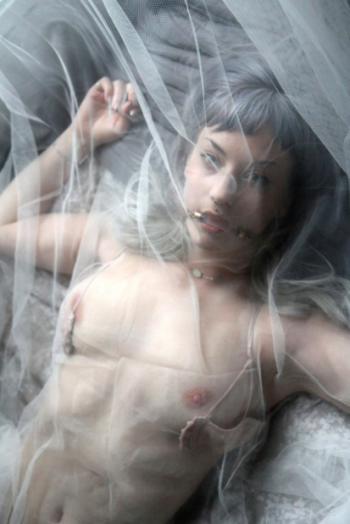 Safewords are great things in theory. The problem is one never hears of anyone using them successfully. Naturally, plenty of visual imagery has been gathered re: their (the safewords’) surrounding circumstances. The visuals are morbidly beautiful, lascivious, taboo things; things involving latex and pain.

Slicked back hair and red lipstick. One hears of dungeons and chains and whips and cages and the thing about this culture—this deviant subculture in every sense of the word—is the conspicuous creation of and equally conspicuous lack of implementation of the Safeword. No one cries Uncle.

In the case of most emergency tools, it seems their true value is only realized in the aftermath of a particularly real emergency, at which time everyone gathers around to discuss; to consider, for example, how that fire extinguisher would have been a great thing if someone hadn’t inhaled the halocarbon and neglected to refill it, and then they right it for next time, paying no mind to other potential pitfalls, not bothering to check, in an extended example, to see if maybe the tweaker who got to the fire extinguisher also managed to swipe the lithium strips off the flashlight batteries (In fairness, a tweaker’s sweep of any site is invariably more thorough than a non-tweaker’s sweep). Surely this reasoning is sound because the same emergency is going to happen in the same place and in the exact same way next time. Just ask TSA.

There is also the issue of groups of people in real emergency situations not actually believing that emergencies are happening, and so not reacting at all, not even thinking to reach for those emergency tools, or to yell banana, if that’s the Safe Word, which, inexplicably, it often seems to be, although I’d choose Orange if I were making a selection from a fruit theme, because (a) nothing rhymes with it, and (b) at the point that I’m experiencing that type of emergency I think every syllable would count (How does one choose an appropriate safety word? It seems like a very personal thing, ruling out the sexual expletives one knows from past experience one will probably let loose in the course of the impending sex, and also the expletives one hasn’t let loose thus far, but might, even though these things are difficult to predict, and sifting through other things that might be said by other involved parties, ruling out possible trigger words that would possibly trigger any number of things, and also words that sound like past and potential sexual expletives and/or trigger words or just common sexual dialogue that is not categorically expletive, so it is shown that one wouldn’t, for example, choose the Safe Word ‘Pig Latin’ because it sounds, when spit-choked, so much like ‘Big Daddy’, which is an incredibly common phrase, even if personally one doesn’t use it in one’s repertoire of sexual dialogue, because in the event that the chosen Safeword is employed the party responsible for halting the festivities can’t be expected to keep track of which words are common to whom, so one can quickly see how the Safeword is not just an arbitrary thing, surely not to be lotteried or left to chance, and therefore deserving of some real mental energy indeed.).

The Bystander Effect is a common thing taught to students of Psych 101 because it is shocking-sounding and easily repeatable in experiments time and again, the showcase example always being the story of one Kitty Genovese, who was stabbed outside of her home by an attacker in front of no less than 38 witnesses. The 38 witnesses did nothing, each assuming someone else did it, or that it was a lover’s quarrel and therefore meant to be ignored, because no one was doing anything about it, because if it were a problem, someone would have done something about it. The attacker also assumed that someone had done something about it, I.e. called the police, and so fled the scene.

But then he (the attacker) realized no one had (done something) and so came back later and rang in a second round of Kitty-stabbing, having no problem picking up where he left off because she was supine and bleeding violently near her doorstep where he’d left her, now an even easier target than the first time, and again, no one did anything for the reasons mentioned the first time, and this second time the attacker accomplished his goal, and Kitty died, obviously from the multiple stab wounds inflicted during two separate attacks. Then someone finally did something.

The larger the group of bystanders gets, the more likely the bystanders are to assume that another bystander will take care of it. The moral of the story is don’t get stabbed in a football stadium if it’s a home game for a team on a winning streak. Get stabbed at a WNBA game.

It gets worse. People take reaction cues from other people. That in itself is scary, because that’s how things like Justin Beiber happen.

The study: five ringers sit at desks in an otherwise empty classroom on the first day of the semester. Real students trickle in slowly. After the second or third real student has taken a seat, some devilish experimenter behind a one-way mirror wafts smoke under the door. Any logical person might conclude that something like an unplanned fire caused the smoke. Nothing good for a carbon-based lifeform causes smoke. The five ringers pay no notice. The real students look around, see that no one else is worried, and decide not to make fools of themselves by worrying. In the real world they all die. In the experimenter world they are rewarded with debriefings and cookies.

And this is why Hollywood is all lies and most people don’t actually react to real emergencies. They don’t react because they would look like fools to run screaming when no one else is screaming, and no one else is screaming for the same reason, and, on top of that, the brain really doesn’t want to believe that there is a real and honest reason to run screaming, and so nobody screams, and especially nobody runs while doing it.

I am convinced that something in this vein can be applied to the ineffectiveness of Safewords.

Then again maybe it’s just embarrassing in the subculture to use them. It is possible that their use has been made an object of ridicule. This is a common fate of safety equipment, E.g. helmets on slow people and reflective nighttime active gear. Or maybe they just don’t work when they’re finally called upon, E.g. FEMA, or Emergency Glass in the event that the person experiencing the Emergency can’t get the Glass to break, even though the Glass specifically says, ‘in case of emergency, break glass’, so maybe the Glass should be a little more breakable, if it’s really meant for that, or maybe the emergency tool just shouldn’t be housed behind something whose only entry point is one of force through a notoriously dangerous material.

An example of the failure of Safewords stars one Saki Jones*, a hardcore performer not just in her own right, but objectively. Not a performer on whom other hardcore performers can look down and scoff for being a less hardcore performer than themselves. Saki Jones travels with her own personalized enema contraption that is not a disposable plastic bottle so much as a hose that is compatible with most standardized western bathroom fixtures. It came in a matching and monogrammed carrying case. It is one of her talking points.

Saki is a seasoned professional. Before any scenes, it is rumored that she is bright and cheerful, but most importantly, prepared, and so always establishes a Safeword but has thus far not used it. She is not one to cry uncle. Companies that like to hire her include the legendary Kink.com, which is known for extra hardcore sex—for kink, if you will—and also for electrocuting people and making girls believe briefly that they are going to die while they are hogtied. Their reputation is solid gold though. No one has ever died there while hogtied. James shoots for them a lot. That is where he learned how to apply the waterboard treatment.

“You should do it to yourself first,” he’d said on set, lighting a cigarette like the Marlboro Man.

“I should waterboard myself?”

“Yeah. You should always know what you’re putting your sub through. It’s the right thing to do.” He exhaled thickly.
I looked at the upstairs corner window facing the back lawn where we stood. Manuel was somewhere in there.

“I don’t think I want to be waterboarded. If Americans protest when it happens to people they’ve been told to hate then it’s probably pretty extreme.”

I looked back up to the master window.

Manuel was somewhere in there having sex with someone whose name I’d forgotten. Probably not so much forgotten as failed to get.

He exhaled through his teeth, like he was straining, or the mechanics of his throat were being singed when the smoke came back up, or something painful and seemingly deterrent to the habit of smoking.

“I said you’re a Pussy for not at least trying it.”

There are some things I learned in Kindergarten that I’ll never forget. One is not to be a pussy. The other is not to be caught eating food off the ground.

“You get in the shower and you put a wet rag over your face and stand under the running water and inhale as deeply as you can, and don’t stop when you think you’re dying.”

So the reason Saki Jone’s Safeword didn’t work and the scene progressed to the point that her left breast implant exploded under pressure could have been any one of these things (for an idea of the relative sturdiness of a typical breast implant, women who fall from significant heights frequently report breaking the ribs behind the implants while the implants remained intact. This is also the case with airbag deployment in car accidents. NFL lineman have been known to try to rip them (Not implanted implants (which by the way all have serial numbers and can help solve homicides like dental records) but implants out of cardboard boxes at doctor’s offices, in case there was any ambiguity). They cannot.) Maybe she didn’t think it was much of an emergency because no one else seemed to. Maybe it was the Bystander Effect. Maybe she didn’t want to cry Uncle, or commit the BDSM equivalent of jogging with reflective wristbands. Maybe she just wanted to try the experience once in order to make an informed decision on future experiences. Safewords fail for all kinds of reasons. But I’d argue, in Saki’s case, it was a failure of basic logic on the part of the director, who, after agreeing with the group on what the Safeword would be and before calling Action, put a ballgag in her mouth.

*Name changed out of common sense.