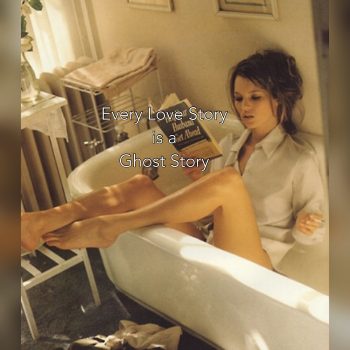 In exchange for a hardcover copy of the book and a pointedly small check I have been given the opportunity to review said book in a forum where such things are marginally relevant. My normal forum is Twitter. Book reviews there are not as encouraged so I’ve taken to padding them on both sides with nudity as a kind of bait and switch tactic. The efforts might be considered underappreciated. Other descriptors to this end might include terms such as resented, defeating, or symptomatic of the pornstar’s larger struggle with life.

The book is DT Max’s biography on David Foster Wallace, “Every Love Story is a Ghost Story.”

My book reviews are terribly simple if you look back through my history. This can be partly explained by the 140-character limit imposed by Twitter, and partly by the fact that Twitter has whittled even outside communications down to the same. Thus, books are either “Shit” or “Amazing”. There is an in-between column I like to call “Eh.” The internal processing behind such reviews is more sophisticated by only the slightest of measures. Any book is promised attention to the 26th page, word count aside. Page 26 might be an arbitrary thing. Or maybe it’s a superstitious thing, or sentimental. The fact is it’s been in effect for so long that the real source of the tradition is lost to us all. Make a myth of it. But the 26th page—if, by that point, a book cannot be continued except under duress, the book is labeled “Shit” and tossed (tossed is a strong word. They are relegated to the out-of-reach regions of my bookshelf, and openly scoffed at for all time). Any book that makes it past the 26th page will be read all the way through*. The last page of any book is always the deciding factor between “Eh” and “Amazing”.

Only an Amazing Book and injured bones can make me cry. That is the test. Amazing Books are further broken down. Often the crying comes from the power of that last page. An Amazing Book is something like the slowest sideways approach to a mirror, each page turned representing a more direct angle at the thing or a step closer until finally you are faced head on with yourself and the lights are turned to their full volume and any distraction is muted, snuffed out, and there you are, human and alone with the reflection of it.

Or sometimes a book is amazing in a lighter sense and the crying is for the loss of the book. I can’t stand to see a good one end.

This system, under closer review, is Shit.

The word often attributed to the work and intent of David Foster Wallace is Important. What he did and who he was and how he shaped and affected a generation of writers and readers, and most importantly, what he wanted to do, is Important.

Eventually, in a twisted kind of logic, Infinite Jest finds its way to the high shelves, where the scoffing takes place, on account of I never even made it to page 26.

Fast-forward some small number of years. Someone I admire greatly tells me to read “The Pale King”. The box is still warm where it is stacked inside the delivery truck it will arrive on when someone else I greatly admire is shocked, wary of my character even, at the discovery that I have not read “Infinite Jest”. I look up to the very top of my bookshelf where it is well out of reach. I wonder how it got there and remember the fact of my 21-year-old assholeness, that single one dog-eared page. The book does not deserve to be there. The ladder is not in sight. For this reason I get in my car and drive to the nearest bookstore and start on his non-fiction instead.

I would suggest that you do the same, with the non-fiction. Get in your car right now and drive straight to a bookstore and buy it all—buy multiple copies of anything written by David Foster Wallace because friends will palm the shit when you’re not looking, and because Christmas is coming, and the people you care about should read this too. Don’t even finish this blog/column/run-on piece. Just get in your car.

David Foster Wallace—I think you should read everything of his, but I also understand that for some people such an undertaking might be lifelong and frustrating. For example, I have no intention or ambition in the direction of reading “Everything and More”. There is an extreme amount of respect for someone who would write such a book but it would take equally extreme and likely illegal forces of persuasion to get me to read it. More than having no ambition, I have no qualms about this. It is a math book. But at least read these titles in roughly this order:

Part of the undertaking of this review project involved the prospect of interviewing the author. “Every Love Story is Ghost Story” came with a sheet that listed DT Max’s touring schedule and relevant press info. There is probably a very official name for this sheet that I have failed to get. It is the sheet that the book reviewers get. I formed questions I might like to ask Mr. Max as I read through—questions involving the title and his personal experience with DFW, his personal feelings on the man’s work, lots of etceteras that were predictable and probably easily answered without taking up the author’s time.

Speaking of predictable, leave it to a biography on DFW to have endnotes. The endnotes answered most of my questions.

This led to a feeling of inadequacy. DT Max is, after all, a very successful writer himself. At times his language felt a little Wallace-ish, if less manic and with a normal amount of words contained in a sentence (or maybe my memory is fusing his writing with the many Wallace quotes he pulled from letters). He has a Harvard degree and a well-adjusted-looking headshot on the book’s sleeve. DT Max feels like a man for whom I should supply the respect of coming up with at least one digging and intelligent question. Something not predictable and not covered in the book, but still relevant. I wanted to be the one wearing the book reviewer hat who made the Harvard man think.

But that didn’t happen. My solution, in the fashion of the times, was to Google it. I Googled other reviews. Said reviews gave some focus to Max’s command of the facts without his letting much bias in—acknowledging that bias-free was an impossible feat—words were thrown around like empathy and scope. Agreed. The book has empathy and scope and surprisingly little bias.

My research was quickly abandoned in favor of acute and full-focused seething at the repeated run-ins with the word nice as it applies to DFW’s character. That he was not nice. It was determined that Max’s close look at the author’s life revealed DFW to be flawed in character and not altogether nice. DFW was determined to be competitive and insecure, somewhat of a liar, a person who needed to prove unendingly that he was smart. He was revealed to be a person obsessive in relationships and never satisfied with his work. Wallace was also said to be a whore—as if there had ever been a successful male writer before him who was not one, as if it were not nearly necessary to the state of being a writer in the first place. And someone threw around the word selfish.

The writer is not nice. Nice is a term reserved for the church ladies at the bake sales who will pat you on the head and give you a cookie and tell you everything will be all right. Jesus loves you. Nice is your mom putting wet rags on your forehead and making you soup when you’re sick. Nice is your girlfriend or your boyfriend remembering your fucking birthday and maybe lighting a candle on your cupcake. Nice should be customer service.

These are not the people who have taken on the task of bleeding themselves out trying to give a name to some outlasting truth about the condition of being this sentient in the universe. These are not the people who have taken the weight of holding up the mirror. The mirror is not nice. Nice is a blindfold. And yes, I’m a fan, and I’m beyond biased—it makes my head hurt to think about how DFW did the smallest thing without giving up entirely with the kind of intelligence he was stuck dealing with daily—but I would think that anyone who has really read his work with any level of candor would have to concede that what Wallace holds up is not just a mirror at a distance a matter of inches from your face but a mirror with a fucking magnifier and lights on all sides. And that’s not nice at all. But it doesn’t mean he’s unfeeling. He feels so much that he keeps coming back to it, expects you to keep coming back to it, to look at it as close as you can look at it, to stand full frontal and perpendicular to the plane of that mirror. He expects the light to expose as much as it can. And it’s a lot, what he’s asking of you, and even more what he expects of himself, but he keeps that mirror bearable by peppering it with punch lines and near constant entertainment. It seems to be the case that he believed that if you looked at it long enough the mirror could be seen through, and on the other side would be some solution to the hideousness of what is staring back at you.

DFW is an amplified version of the character traits we all have to varying degrees. If we’ve had any level of success we’ve been competitive. If we’ve experienced any kind of overwhelming love we’ve been obsessive. If we’ve ever cared about the authenticity and integrity of our accomplishments we’ve been insecure. If we’ve ever grown our abilities we’ve found increasing amounts of flaws in our previous work. If we’ve ever stressed the importance of an event we’ve fictionalized the main forces with exaggeration—with straight fiction sometimes—because those forces are what get to the truth of the matter and so those forces must be highlighted or colored in to demonstrate it. And if we’ve ever shown a truth head-on we have failed to be nice.

To his credit and his end, David Foster Wallace was not nice.

D.T. Max’s biography of Wallace shows a level of commitment to Wallace’s interior self that is maybe just very cutting edge journalism or maybe what I’m choosing to believe, which is an incredibly personal respect for his subject. I can tell you the book, by my shit classification standards, was Amazing. I couldn’t put it down. To test my bias I tried the book on a friend. She experienced the same symptoms. The book is highly readable. For the Wallace fan (and who else but fans read biographies anyway?) it behaves like a decoding tool for his work. It makes things that much clearer. Of the Wallace critic I’d ask what exactly they expected of the personality of someone who could create something as expansive and provoking as the body of work that Wallace put forth. I’d ask when the last time was that they saw a bake sale leader write like that. Of D.T. Max I’d ask whether he thinks the true writers shouldn’t be exempted in some sense from the very criticism that has risen of Wallace in the wake of his biography. And then I’d ask him why he didn’t sign my book.

(anyone who loves DFW should understand my Fleshlight’s Halloween costume)