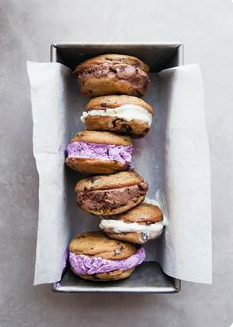 Of course I’m writing this as I’m eating a chocolate chip cookie. Make that two. It was going take only one to be polite when the hotel staff put them out on a platter, but then I realized they were fresh out of the oven and I decided to be really really polite. I may go for a third in a little while. Really really really polite. That’s how I was raised.

Actually I didn’t mean to blog about cookies. I really meant to announce that I just finished my last final of the semester. This is profound, mostly because I finished at all. In another blog I was bitching about the whole nine units I no longer wanted. I even tried to drop two of the classes. It was too late though. So, against my will, I wrote the stupid term paper, I did the busy work, I kept up on current events so I could discuss them with other students who held terribly limited views on the state of the world, and I just finished my third final in three days. Now I’m eating cookies and in a few hours I have a date with the strip club down the street.

Before I completely put this semester behind me though, I’d just like to bring up the increasingly vague things I’ve been taught. Exhibit A:

Fixed Resource: any resource that cannot be varied in the short run

Short Run: a period during which at least one of a firm’s resources is fixed

This has been copied directly from the text. Most of the book is this way. I’ll admit this class is a little more concrete than the fleet of philosophy classes I took where every lesson or point began with “I would suggest to you…” and end with a list of reasons why everything I was just taught five minutes before was wrong. Or not. But it didn’t stop there. It never stopped there. We would rebut the rebuttals. To this day I don’t know whether Identity matters, but according to my professor, he would be very upset if the woman he was sleeping with looked like his wife but was not his wife. My argument: every man loves twins.

Ironically, the one philosophical question that was answered definitively was the age-old, “if a tree falls in the forest, and no one hears it, did it really make a sound?”

The answer is no. Sound is only made when sound vibrations meet an organ that can interpret them as sound, namely, an ear. Without an ear, they will forever remain vibrations.

My argument: obviously the point of that question had nothing to do with whether an ear was present, so rewritten, the question would be: “if a tree falls in the forest and no one witnesses it, did it really fall?” ….and the circle can continue.

Now my question is: if the information taught in this class is only useful in the context of the classroom for testing purposes (as is the case with the aforementioned economics terms, because they cannot be applied to the real world without further instruction), then did education actually take place? I’m leaning towards no. And in that case, I’d like a refund.