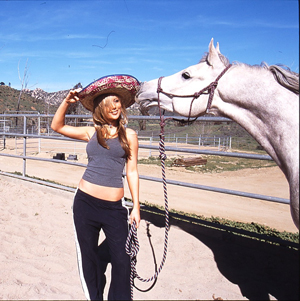 It’s 12:23 pm and I’m in a trailer that was bought as someone’s wife’s idea of camping but is now doubling as the porn set mother ship. We all start here. We rolled out in it at 8:30 this morning. Aside from a 7-11 stop to substitute for the inconspicuous lack of true coffee we spent the rest of the morning braving potholes that could have enveloped the entire rig and navigating our way past no trespassing signs and wire stringed fences. It was all dirt roads and Joshua trees. And meth labs. I’ve used the word road a bit liberally here. They’re more like wide coyote paths. Roads have purpose and pavement and street signs. We had meandering paths that dead ended into crumbling foundations or other accidental trails. We could see where we wanted to be but it was fenced in. Try backing a 40 ft trailer on sand in the middle of BFE. There have been easier days.

The director decided (wisely) to change the location about 3 hours into the drive so we headed to the second site of the day and made it work. It’s an abandoned mining camp. We went through a town that consisted of motels and trailers and was strangely unpopulated. Not a single person. Upon entering the town the sign on the side of the road said “Welcome to Rosamond– the gateway to progress.” David Lord laughed, “guess they progressed right out of here.” At this point the gas light was dinging and we needed diesel in a town that had no street signs. The make up artist had downed a five hour energy bottle and was not having an easy time containing herself. I was cycling back and forth between caffeine highs and lows. We finally found diesel and I grabbed another coffee. Almost noon and the day hadn’t started.

It eventually did start with me on a cross. Don’t worry. I know it sounds slightly like a mistruth so I followed up with video footage to prove it. I’ll be uploading it the second I get home. Two hours tied with leather to old railroad posts started to feel like the real thing. Strangely it was one of the few times I actually felt sexy during a shoot. Most of the time I’m worrying about other things or developing body image issues with each subsequent click. It was something about the desert wind and the sun on the inside of my thighs. This is starting to sound too much like a bad romance novel. I’ll stop. Plus I was laying there so long that buzzards started circling above me and it detracted from my fleeting sexy time. It’s going to be gorgeous in the movie though. I’m working with porn artists.

About a week ago my horse and I had a slight disagreement over whether my finger was a treat or not. I won, but it took him tasting for himself before he would give in. That finger has been numb ever since. A little nerve damage goes a long way these days. I’m missing keystrokes, I can’t eat sushi properly. Hell, I can’t suck dick properly (it‘s my right hand). I’m clumsy. That sucks because today that clumsiness cost me another finger. I smashed it so hard that it cut through the nail on the top of the adjacent middle finger. The whole nail bed is black. It’s not a good look for me. I was relieved to find that this one was happy to go numb as well at first, but that has since subsided and been replaced with a throbbing that rivals the birth of Athena. I’ve never broken a bone before but I honestly believe the tip is broken. The pain is shooting all the way up to my elbow and frankly I should know better than to be typing right now.

But really I’m not sure what to do about this. I don’t know what broken bones feel like. Maybe I’m over reacting. I don’t even know that the ER would do anything about it. All I know is that if this fucking thing is interrupting my blog fun.