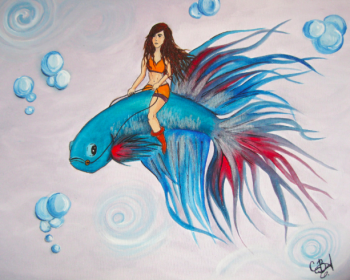 Well,l I’ve had some free time on my hands. It was an adjustment period but I’m settling in. Yesterday, I considered the acquisition of a goldfish. There was a beta fish prospect, too. When I was younger, there was a succession of fish all named Marshall and as each one died the suffixes became heavier weights for the poor fish to carry. Marshall the third was a good fish. I buried him in my roommate’s money tree, which also died. I don’t believe in signs, but that one made me uncomfortable. I stopped buying beta fish. I was really into them for awhile though. I knew how they were bred in the tanks (complex process) and I knew how to tell the difference between a male and female and a crowntail and halfmoon and what a good healthy show fish would look like, were I to show my beta fish. But all three Marshalls were pet quality and the interest died with them.

The problem with looking at beta fish and goldfish is that the pet store also chinchillas and I ended up carrying one of those around the store for an hour while I contemplated spending $150 bucks on a rodent (are they rodents?). He was very cool and it hurt to part with him, but when the sales chick told me I’d have to keep the heat turned off in my house it was a deal breaker. I don’t do cold.

I looked at a rat. My whole life has been plagued by rat-anti-serendipity. I’ve always meant to have one and it never seems to happen. When I was a kid my mom refused to pay to have rats in the house. Then I when I moved out I had white hamster named Molly who traveled around in my front pocket for six months until she got lost in my car (I also lost a few green anoles in my car). Rats aren’t nice to hamsters.  I held off on rats in the name of Molly. Then I hit college and the one class I wanted to take every single semester was Behavioral Psychology with a certain professor who gave every student their very own rat at the beginning of the semester. That class was full every single semester, and I never seemed to have priority. It’s unfortunate, because I would have been able to keep the rat after he was graded.

So I’ve been holding out for this psychology rat ever since. And that leads to the point of this blog. Chinchillas and rats and pet fish and some extra time on my hands got me thinking about school. No one seemed to notice or jump on my case last semester, but I didn’t take any classes. Mostly because the spring semester got out in May and I woke up the next day and it was October and I had somehow changed cities and launched a website and booked a feature dancing tour and frankly I was a little shocked at that ripple in the universe but it was too late to do anything about it. It’s also too late to transfer to a four year college within driving distance and enroll in classes for the Spring but it’s not too late to grab a few last minute community college classes. So I applied. I’m giddy. I went through the list of available classes and it looks like I’ll be able to squeeze 9 interesting units out of it if I delicately balance the schedule. Classes start Feb. 9th. Oh boy.