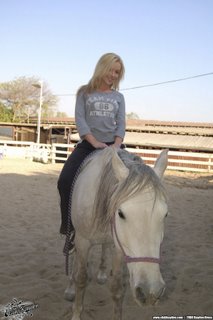 People think I’m joking when I say I want to be and Indian when I grow up. A pre-Columbian Indian, except with horses. I think they had it right.

Stress is not supposed to be a lifelong malady. Stress is supposed to happen in spurts to motivate us to get away from saber tooth tigers and Columbus. We are not supposed to have hypertension and chronic colds and depressed immune systems. Ever wonder why we don’t get vaccines for colds, why it’s always the ‘common cold’ with no better explanation, you’re exposed to it or you’re not and it has very little bearing on whether you actually get it. Is it a bacteria or a virus or even somatic at all? Are we just reacting to constant stress… I’m not a doctor I’m asking you.

I find that lately I’m happiest when I’m doing something I would do as a horse-owning Indian. I like to prolong meals with good conversationalists. I like to catch up with my tribe. I like to bond with my horse (he’s from the Cortez lines don’t fault him). I like to walk in the woods and dress comfortably (although I’m not a huge proponent of animal skins, but then again the Indians weren’t clubbing babies that they raised in wire cages under abusive conditions). I like moccasins and camping and range fed meat free of steroids and antibiotics and genetic engineering. I think if I could have all of these things everyday and be an accepted member of a tribe that valued the same I would gladly trade all of the conveniences of modern life without a second thought. I’d even dye my hair black and wear braids. I’d smoke a tribal pipe.

My idealized horse owning pre-Columbian society had better nutrition. I’d like to think they were sexier with their organic diets and active lifestyles and lack of stress and high cheekbones. Kind of like the women in Venice and Manhattan Beach in the tight little yoga pants. I’d like to think they had better sex without all the hang-ups of the various Abrahamic sects that flooded in after dear old Columbus. They didn’t die from chronic illness the way we do. But I don’t want to die in childbirth either… generally I just don’t want to die so I don’t think that’s a point on either side. Let’s just say they were naturally healthier than we are and call it a day. All of our medical advances seem to be spent clearing up our modern side effects anyway.

I would go so far as to say I can’t stand modern conveniences. I don’t like being 30,000 ft. in the air in a machine that could plummet back to earth. I don’t like keeping track of time down to the minute, for appointments, for parking meters, for due dates and deadlines, bills, taxes, closing time, meetings, and expiration dates. I don’t like constantly having to stay abreast of a fractured network of small governments inside slightly larger governments and on up to the federal government, then international law, then the fractured governments of whatever place I travel to next. The work required just to exist without violating a law or owing someone money is exhausting. It’s killing me slowly. Heart disease, cancers, diabetes, trans fat, fried fat, additives, secondhand smoke, pollution, small time radiation, full blown radiation, fortifiers in food that our bodies don’t even absorb, strange residues and fluoride in water we extract from cement rivers flowing from someone else’s toilet—and it’s illegal to collect rainwater in some areas. Give me some goddamn buffalo and corn and leave me alone.