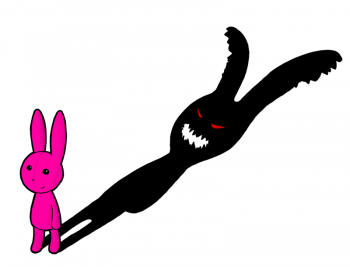 Have you ever had a pet rabbit? I have. I’ve had dozens of them. Here’s my dirty little secret: I was in FFA. I was a Future Farmer of America. I had the blue corduroy jacket with the little badges. I had the sturdy shoes. And I had rabbits. When other 14 and 15 year old girls were cheerleaders and volley ball players in little skirts and spandex shorts I was in boots. When they raised money with bikini car washes I raised money by getting people to overbid on pig meat for our chapter. When they learned how to jump really high and squeal I learned how to milk a cow. And through it all I loved my rabbits.

I had mini rexes. They’re called the velveteen rabbit because their guard hair is as long as their down and when you touch them it feels like you’re petting warm air. I had 14 of them and they were my favorite things on the planet. Then at the end of the school year, after the rabbit shows, after I turned in my rabbit business book, after I sold the last babies of the last litter, my mom put her foot down and said there was no reason on earth for me to have 14 rabbits and my brood was disbanded. I’d have to say that parental control backfired. I discovered sex the next week.

And this leads me to my point. I feel like an experienced rabbit owner. Now I have Sammy. For those of you who don’t remember the unfortunate Downtown LA trip that ended with me rescuing 2 baby bunnies and 3 fish, Sammy is the result. I kept him. And in my expert rabbit opinion Sammy is evil bunny Einstein. He is not a normal rabbit.

He is perfectly potty trained. He roams freely around my house and there is not a poop out of place. Now he feeds himself. He found his food, he opened it, and he takes what he wants when he wants. He runs to the front door when I come home and greets me like a dog. I have to scold him for pulling fruits and vegetables out of the garbage. I have to scold him for trying to eat off my plate. He begs. For the last week I’ve found him lying next to my side of the bed in the morning. He watches TV with people who come over… he comes when he’s called.

And now he’s mad at me. I don’t know what I did. But all fucking morning he’s been stalking me. I was sitting at my desk in slippers, minding my own business, and out of nowhere he kept darting in and pulling my slipper off and biting my foot. Then he would retreat and it would start again. He’s a bunny gremlin. He’s making me paranoid. I keep seeing him in my peripheral and he eyes me and creeps back under the treadmill, or the bed, or into the closet, and I get goosebumps. Sammy plots.