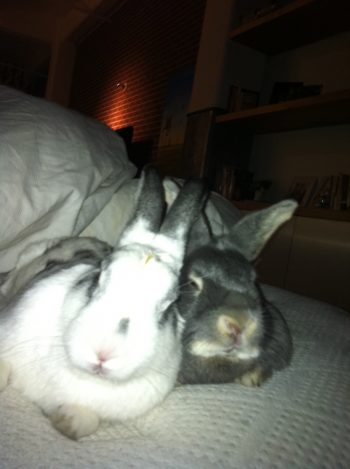 I’m on rabbit duty right now. It’s Sammy’s first time outside of her cage in the new loft. Yes. Her cage. In my never ending

quest to save my house from vermin destruction I found out that Sammy is actually a her… but that’s why the rabbit had an androgynous name in the first place. I wasn’t about to commit to a gender on a six week old mutt rabbit off the streets of LA.

It was the vet who finally went on the record with an educated take on the whole thing, as Sammy lay splayed out on the operating table ready to have his balls removed. I can’t for the life of me figure out why this thing wasn’t caught earlier, perhaps maybe at the initial ceck up that they charged me $60 for… or maybe in the 5 hour time span after. I don’t know why it took anesthesia and a searching scalpel to finally realize the cold hard truth.

I was disappointed that Sammy had no alls. I’m not gonna lie. It’s not that I think her new gender identity will actually change our relationship… it’s just that I was counting on a quick snip of the testes to curb the insane house eating habit. It doesn’t work the same on females.So I took Sammy home in defeat and set about rabbit proofing my loft. I wrapped ever single accessible cord with electrical tape to cover up the exposed copper wie underneath from previous meals. I used zip ties and cool little adhesive cord keepers to make the cords as tidy and un-rabbit-friendly as possible. I cleaned up after the massive electrical flare up that almost killed me when one of the less lucky lamps got plugged in…. and then I covered it all in bunny repellent

I put all of my books on shelves out of reach, which has left me with boxes and boxes of unpacked books, and they will remain that way until I get more shelving. High shelving. I slathered my wood furniture with Pledge, a key ingredient that Sammy has found to be not to her liking.

So that brings us up to this moment. I’ve done as much as I can with the loft–

–and I’m sitting here blogging about my sadly amusing situation, as I spend my evening drinking Coke Zero armed with a bottle of rabbit repellent and a cocked ear so I can react with swift justice in the event of any errant nesting or foraging on the part of Sammy the gender fluid bunny.

PS these are pictures of my new rabbit proofed place: