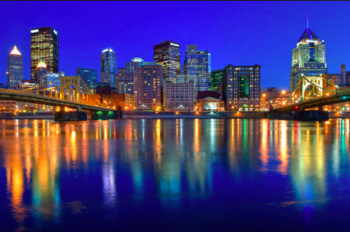 I’m in Pittsburgh through Saturday on a feature at Blush. Nevermind that I said I’d be in Philly. That was a half-truth at best. It turns out my layover was in Philly. I figured it out around 4am as I was loading my luggage to head to the airport. I looked up my itinerary online to make sure everything was running on time. It was. And so was the mysterious second leg of my flight that took me on to Pittsburg. So here I am

As a bonus their construction workers are all hot. This is promising. Imagine what all the other employed citizens look like. It’s Friday morning so they’re in hiding behind desks and stack of paperwork but they’re out there. And their drug dealers are even friendly. Usually drug dealers are mean, or at least that’s the impression I get from the movies.