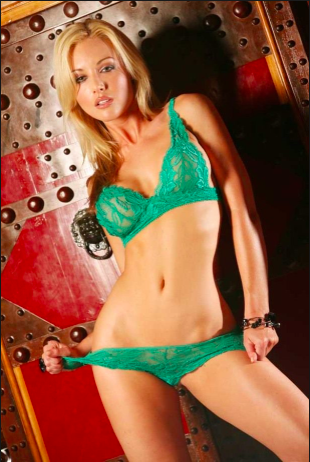 From "The Ultimate Spike Girl"

Today was day two of the Fall 09 semester. In logical order yesterday was day one and I realized it about an hour before my first class was scheduled to start. I have 12 units on the roster again and I hate six of them. I love the other six though, despite the $250 books and the fact that they each run for three hours straight. I love them so much that I looked forward to losing a beauty pageant of sorts just to be on time today.

The “pageant”: It started off as a cattle call. Thousands of applicants were narrowed down to 50 and 50 down to 8. I made it that far. The problem with making it that far though is that my alarm went off at 5am this morning. Very few things are worth 5am traumatic wake up sirens and this barely teetered on the edge.

I got up though and found my way to a rented out bar with a room full of half naked Playboy quality chicks. If I’ve just given life to your personal fantasy I don’t blame you. Feel free to covet at this point. Hours later we hobbled down a series of winding staircases in red-soled pumps and silver bangles and presented ourselves to a round of judges and a surprise audience. This was the trivia portion. If we made it to the next round we’d be demonstrating a unique talent. Thank god I didn’t make it that far because I do not have one.

The “questions”: I got lucky. Things could have been much worse. The professional cheerleader next to me matched players with teams and trophies with years effortlessly as she tossed her perfectly smooth hair over her perfectly tanned shoulder. The two to the right smacked down questions about the Simpsons and drinking games and things they couldn’t say they never have I ever done. Cheers to the chick with the personal sex tape floating around. And me? I knew what a shart was. Woo Hoo. They had the cool trivia and I had more things related to buttholes primed and ready on the tip of my tongue.

There were things I didn’t know. I didn’t know who owned the Lakers and I still don’t. Megan Fox. When in doubt the answer is always Megan Fox. That’s what I learned from the guys I asked about guy knowledge. They immediately hit me with a follow up question. “Who coaches the Lakers?” Megan Fox. Duh.

And then there were the open-ended questions. What super power would we have and why…. And of course, have we ever been with a girl. The girls around me had kissed a few, drunk or at least surrounded by other drunk people. The cute little cheerleader confided that she had never actually sealed the deal…. And then there was me. I’ve sealed many a deal. I said so. I got that racy cheer from the crowd. That would be my claim to fame for the day.

So I didn’t make it to the final round. The girls who knew every character and every level of every bestselling video game for the past five years and the girls who knew that Homer Simpson drinks Duff Beer at Moe’s made it to the final round. I smiled broadly and clapped and slipped out the back door, happy for the publicity and the chance to duck out on demonstrating my non existent talent, and mostly because I was going to be on time for the six units I don’t hate.