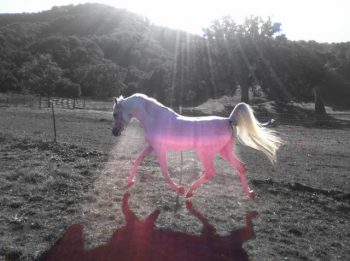 My friends mom died. She did it last Monday, 48 years old with two kids recently grown and out of the house and blood in her vomit. The only significant thing that happened leading up to it was a fall from a horse–a small horse. She landed on her hip and walked away. A week later her 23 year old daughter is flying up from San Diego to help with funeral arrangements. It’s hard to think of life in terms of fragile when you’re still stuck on youth and your own resilience and adaptability.

I don’t know what to say to the friend. I’ve known her since seventh grade. We rode horses together, with her mom leading the way teaching us backyard vet care and how to cure a kicker. I’ve seen her arm wrestle and mud wrestle my own horse. She’s the type that tells you what you’re gonna do, loudly, and if you don’t do it, assumes its because you didn’t hear her, so she yells louder. Then you do it. She has wild red hair and walks like she was born on a horse. She’s so knowledgeable that she carries horse business cards, horse certifications, volunteers at a horse riding therapy center, and now she’s down for good from a spill off a pony in the pasture. The family doesn’t know what to do with her horses.

It’s not a large town. It’s located in the foothills outside of Sacramento and the only people who know about it are the weekenders who have a cabin in Tahoe. They stop there for gas. It’s the four way stoplight where the freeway ends and the highway begins. There’s a Burger King and a McDonald’s and a token Main Street where the shops sell mostly antiques and the coffee houses are good. I went to school there. We’d ride our horses straight down the streets. There’s a bar called PJs where you can tie them up and every year The Wagon Train Parade will do it’s two week ride from the Nevada border down through the 4-way stop light and end at Main Street. I did the ride once. My friend did it every year. Her mom was a staple there. She and her husband renewed their vows on that ride. Just before she died he was still giving her Hallmark cards every week.

Now my friend is sorting through what’s left behind, because her mother saved everything down to bits of leather that could be used to reattach snaffle bits to headstalls and spurs onto boots. She saved the dogs that were brought home and the rose bushes that her husband gave her on Valentine’s day–one for each year they were married. She saved the cards from him and the letters from her son in prison. Five hundred people attended the funeral. The son wrote a letter for this too and my friend read it at the ceremony and was fine, until she wasn’t, and she cried. Her grandfather stood behind her in a show of support, but it’s hard to prop up that kind of emotion.

My friend is good all the way through. She’s worked for the same company since she was sixteen and graduated on time then moved to San Diego and signed up for classes, making things work to relocate within the company. She’s never late and she always pays her bills. She’s the first person you call in a crisis and so was her mom, if it involved a horse. The two of them were there for almost every rescue I picked up, helping me haul them, train them, medicate the mange and the worms. Our mothers went to school together and our grandparents serve on the local level for the same political party. I see generations as defense lines against death. My great grandma passed away when I was 19 and it never occurred to me until then that such a thing might happen. I still have four grandparents left, a mother and father in line after them. I hadn’t planned on facing my own mortality until everyone before me faced theirs. It’s selfish, but seems like the natural order of things. This has thrown a wrench in my view of the world, and I’m still sitting here unsure of what to say to my friend. Maybe I’m sorry, that’s horrible. Or, You’re such a good kid and she’d be proud. Words are terribly limiting in these cases.

I want to console her and say she lived a good life, something that would flow with the American dream–two kids, strong and healthy, a dog, a picket fence and a loving husband. A packed funeral.