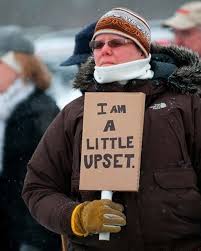 Well I walked around Adultcon today. I wasn’t signing, although I did end up signing things that fans just happened to be carrying in their back pockets, like slicks of my vagina. Small world. I was media. It said so on my little red media wristband that one of the employees strapped to my right wrist with the greatest of care, being sure the make it tight enough that I could never ever slip it off and share my prized access with a fellow wearer.

And once we got all set up with our wires and our sound checks and the bouncers treating us like we were special, we realized there wasn’t a whole lot to report on. It was 4pm on a Saturday. There was nothing outrageous. Nothing really worth making fun of. There were some hot chicks. Sophia Santi, Dana DeArmond. A few others. Some naked superheros. Naked is a debatable term of course, because they were dressed in paint. We got pictures with them and they signed their first names over our faces. We were unhappy with the outcome. We went to the dungeon room and the violet wand had a comb attachment. We are a creative species.

But overall, there was nothing shocking. Nothing worthy of my debut media attention. We got restless and decided to bug the picketers.

The picketers were stationed in front of the entrances with signs that accused pornography of either hurting children or exploiting women. I would argue that it exploits men more than women, but what can you do. They’re a hardheaded lot. My cohost, the lovely and talented Dane Hanson, pointed out to them that their signs were rather unimaginative. It was plain black text on a plain white background. The church brought them. There’d been one of two choices. It was funny though, because when asked what they would write if they had their own signs, and could dress them up with glitter and slogans and maybe bullet points, they all stuck with what was already on their respective signs. They had two opinions to choose from and seemed content with it. Maybe I’m greedy. I want my own opinion.