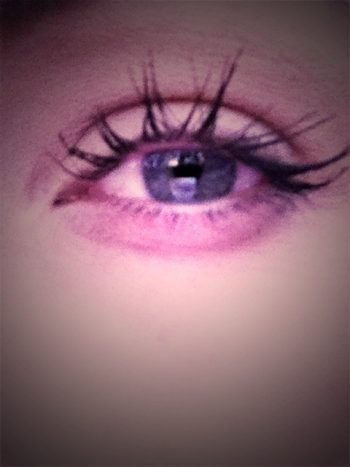 My horse is still pregnant. There is something fitting about my first up close and personal experience with the violence of birth happening right before the world ends. It feels pretty cataclysmic. I’m reading all of the books and following the graphics and even though the pictures are black and white and for the most part sketched I feel like I can see the blood all over them, guts splattered like a Rorschach test against the sterilized gloves, the walls, the eyeglasses of the person taking advantage of a quick photo op with his hand elbow deep in a horse that has enough things stuck inside of her as it is.

The pictures show the fetal development as it kicks around and spreads out into something more familiar looking, sprouts the things we like to see before we deem it cute. Things like eyes and ears and tiny feet.

What’s not cute is the experience for the female stuck on the outside of this little universe with her teats bagging up and causing the nipples to go cross eyed, the back starting to sag. The bitchiness. She pees nonstop and I keep checking under her tail to see how loose the vulva is. She had an episiotomy a month ago. Vet said it’s best to do it early. Here’s the thing about an episiotomy: they do those to humans too. They do them to all kinds of female things. The way a man will lean forward and instinctively protect his crotch at the mention of something like a steel toed boot to the groin I keep seeing women lurch a little in the throat when I describe how the vet just hooked his finger right up in there and took some scissors that seemed about five sizes too small for the job and started tearing away at it. Snip snip snip. Less blood than you’d think. Something like the fluid that gathers in the packaging around a slab of raw steak in the butcher’s section. Thin looking.

She’s big and wide from the back now. At the point where running her on the trails felt like riding a side-to-side motion from the swinging middle as opposed to your run-of-the-mill forward movement I figured it was time to slow down and give her a break. Now it’s hand walks. I lead her around a little dirt track and we stop frequently for roadside snacks. There are always funny noises drifting out of that thing she’s carrying around in there. Everything sounds subaquatic and gaseous. The book shows me how to watch her shape change to know that the foal is getting close. I watch her get more depth at the lowest point of the belly and watch her back sag even more. Somehow a blueprint of herself is going to spring out with four legs and the lung capacity to run at her speed from the second it lands. And that’s what it’s going to do. It’s going to land. Like some alien pod breaking open its gonna crash out headfirst in a saltwater bath of it’s own fluid, break through the sac that at this very moment is connected by every square inch to the space inside of her, attached by a root system of vessels that build life by feeding off of everything she brings in.

And the book says to watch the ligaments. They’ll slacken and give until the flesh in her back end wiggles like Jell-O to the touch. When she walks it ripples. A big bulging vein has stood up along the underside and runs up and out of sight into crevices that are too sore now to the touch. Under the tail things are falling apart. Slack-jawed. The book says she’s just getting started. Something about wait until it resembles the empty sleeve of a jacket.

And still I can’t see how this thing is gonna get out. The math isn’t right. She’s three days from her due date and I’m having dreams now where I miss it and she splits in half like those movies where the egg hatches straight out of the host’s chest cavity to the scream queen’s horror. I wake up screaming too.

There’s more. As if pregnancy weren’t enough to deal with the poor mare turned up with Scratches on her hind feet. Horses with feathering will sometimes get it. It’s essentially a yeast infection. The vet told me to put Monistat on it and triple antibiotic ointment. He told me to grow up when I gagged. He wrote me a shopping list and it went like this:

So I’m gearing up with my new military cot and my sleeping bag to camp out by the stall. I have baby monitors and a Coleman lamp. My pharmacy items and a bunch of towels I expect never to need again. Books. I’m supposed to wait it out. She’s supposed to break her water. And then I dive in, help where she needs it, get splattered with every conceivable thing she could think to throw at me. Clear the sac off the nose, cauterize the cord, watch him find his mother and his milk. I’m unclear on if or when the enemas become necessary. And somewhere in there, when I finally see his face, I’ll love him immediately and unconditionally and forget all of the illogical and terrible things that had to happen to get to this magical point I.e. the miracle of life.

And also, I will not be getting pregnant any time soon.

update: baby came April 8th. We named her Maya on account of 2012 and the Mayan end-of-world craze, and on account of the Fresian pedigree requirements, which dictated that her name must begin with an “M,” and also on account of a fictional foal character from a book I read as a kid, whose protagonist kept a horse secretly in the woods. The horse had a foal. The foal’s name was–you guessed it–Maya.

But enough about that. Here are baby pictures!

And here I am getting cozy with the placenta for good measure.