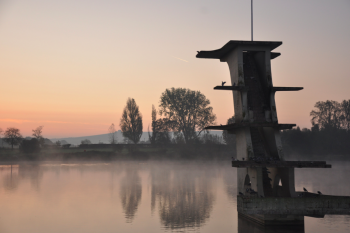 The sleep would spit you out into mornings that were so harsh you would stay behind with the rustle of the tent, all of the canvas and the weatherproofing, still slick with dream and the sound of the sleeping bag rubbing on itself. Then you would know where you were and slowly come back into the world. You’d feel the rocks beneath you through your spine, feel like a princess high on a stack of mattresses, discerning, feel like a cowboy in the muscle, like a pauper and a king and every necessary piece of a conflicting whole. You feel your part in it. You feel like your roots might go straight back through the fabric and to the ground.

You feel the heat and where it ends, right at the line of your body, hard where it stayed on the surface and blurred where your energy absorbed into the dirt. You feel constant. You note the outline as proof of yourself when you shift your shoulders to the side and listen to the voices through the tent, close, close enough to bind together and bring themselves back to the source, to drop their guards and tell their stories, mix their children, lay the world out to dry by the fire and stare openly over the flame. You hear them with their pots and their pans banging together, mixed and matched, their coffee that you’re too young to need. You hear the water being poured from one thing to the next and you know it’s freezing or it’s boiling and it came straight up out of the land. You know that it matters. You hear the dogs barking, one, two, three, four, one for every family, dog-sized dogs, the hardware on their collars hitting a high note where they spin and carrying for miles on the clean lines of clean air. You can name each person by the footstep, by the motions muffled in their shirtsleeves and the layers underneath. You can hear their buttons done up to the neck.

You turn over and you listen again. Now it is to the breathing of your brother, your sister, shallow and untroubled, sweet the way the mouth falls open and stays wet. You hear the teeth coming through the gums and remember how you were there for the birth, the screaming and the wet, the first broken bone, screaming and wet, twisted ankles, your kisses on the stitches and scraped skin, screaming and wet, perfect life trying to stay in place with heels dug into the dirt as it’s pulled along, screaming and wet, screaming and wet. You want to reach down and wrap the wounds with yourself and the way a child breathes with your same blood rushing over his lungs you know you would. You would and you would never look back.

You hear the murmur of the voices again over the pans and flannel shirts, quieted for you and the children and other children in other tents with their own sweetness and their sleep. They quiet the dogs too and move the kettle just before it squeals, they heat the gristle of the meat and hot slick balls slide and pop from the pan. They think of you when they unpack small plastic plates, the odd ends of old cutlery, heat chocolate over a gas flame with their foreheads tilted into each other when they speak, their voices passed on the same breath, eye contact dropped while they watch the camp and breastbones turned to the world because they would fight it for you. They would fight it and they would never look back.

You shock yourself now with the way that you are. You’ve watched clothes float above the ankle in a season and you’ve watched boxes overflow with the things that you used to be, sloughed off, hauled away with thick-tipped markers taken to the flaps and sealed shut with tape in the garage. You didn’t eat green this time last year and now you take your sugar a little less sweet. You sweat. You made a true friend and it took time. You’ve grappled with honor and fell short and you’re aware now that you can do wrong, real wrong, things beyond a child’s wrong and things you can’t change. Some days you feel like every next step forces you to cause pain or ease it and the best you can throw at it is a blind guess. You miss. You’ve killed things because you thought it would help, and others for sport. You’ve been drug in yourself, screaming and wet, thrown down in the dirt with the words that you couldn’t keep. You grow. Then some days you know what’s right on your own and you wonder how.

Yesterday you made a marker in your memory when you thought you’d be safe if you stopped at the shore. You stood with your toes to the water and watched it lap and pool where they spread and watched the sand inch up and back again, never making progress but somehow already closer to landing somewhere else, becoming bone-dry but never settled. You lurched. You watched a stick float in the distance and needed an anchor, something to stay in place to show you that it could. For one long low breath you were able to hold on but when you blinked it was somewhere else too. You exhaled. The wind moved and the water washed over you again and already the trees were a little higher. You threw your head back and faced the sky and watched the way the green never caught up to the blue, watched the way they spun when you tried to stay too still. You realized that it would all be gone in a moment and you pressed your lids hard over your eyes and flattened it down and made it clear. You knew it was worth holding on to because something new was happening and this was the last of another thing but you didn’t know what. It was new like the first time you noticed, really noticed, the things that were hung on the walls of your home. The first time you saw that other people had lives outside of yours. Everyone had a man named father, and every mother was a daughter too.

You suck in your air suddenly, drowning, bobbing your head between the lake and tent. Then you are present. You count the hours backwards to the stick moving away from you, impossible to pin down, cold washing over again. You face the way you can’t look head on at the sky for too long, the way each time you examine it there is a larger gap. You count how much closer you have come to the next ten years in the span of a breath. To twenty years. To thirty and thirty more and then you see each night’s sleep as the plank that you will walk into the morning’s change. You always knew but had never believed that you will grow eyelevel to your father. The children will grow out of themselves and more will come and then some will belong to you. They will pour from you, and you will hollow yourself out trying to tuck them back in. You are aware, irrevocably, of things bigger than yourself. Bigger than your parents and your summer, cold things, opportunistic and unjust things. Things that don’t stop at the crosswalk on your street.

There is an impatience now with what you don’t know and what you will learn. You fear you will learn why poor men go to the frontlines of the rich man’s war, why fur doesn’t come cheap, why strangers shouldn’t need your name and skin color changes at the train tracks. You will learn that not all dogs die quickly and that whole countries can be drug in by the cat, left on the back porch, all of the pieces fluttering and broke, your fault because you lived there. You will learn that right and wrong floats like a stick in the water and the waves you make moving forward toward it are the same that push it away.

When the tent wall falls down beneath the zipper and the morning spills in with the smell of bacon and soot, you turn your face to your mother and for the first time see that she is flawed.