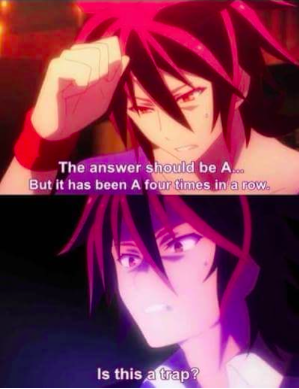 So I spent my day at the DMV yesterday. I’m talking about a big chunk of my waking hours here. I had to renew my license and I didn’t make an appointment. I just walked in there with a fat book and a full battery on my phone and some bottled provisions. There was an hour-long line just to pull a ticket. Ominous, right?

Anyway I get this ticket and I sit down and at some point I realize that this drivers license renewal business is going to require me to take a written test. This is no problem though, because I have hours. There is time to kill. So I download this app that suits exactly my purposes, because of course there’s an app for it, and I start flipping through these test questions.

Heres the thing about DMV driving test questions: pretty early on you realize why there are so many accidents. You know those days where some asshole is driving up the wrong side of a one way or riding his brakes in the fast lane looking like he’s looking for somewhere to try to turn left or some bullshit, or when you’re just trying to get to work in the morning and some asshole inches into the intersection when his light’s yellow and it’s obvious the cars in front of him aren’t going anywhere fast and now your light just turned green and the fucker is still there, stuck, acting like the fairies of fate have joined forces to conspire against his dumb ass? Yeah. That’s every day. Every day some asshole is driving like an asshole. But I figured out why today.

Here’s a real question: a printed picture of a stop sign is drawn. The question is what the sign means. It is multiple choice. The choices are:

a) do not enter
b) be prepared to stop, slow down, and look both directions for trains
c) stop and wait until the way is clear before proceeding
d) slow down, drive with extra caution, and watch for children

Here’s another one: what does a “no parking” sign mean?

I mean, granted, I’m stepping into eugenics a little with this, but I don’t think any male who thinks he’s going to climb up on a female should be allowed to do so without at least having a general idea of what and where a clit is. I’ve met people who don’t. I mean, they’re off by inches sometimes. That’s plural. More than one inch. There’s not a ton of surface area down there. And inch goes a long way. But two inches? Or–god forbid–three? That’s unfuckingacceptable. And yes, usually if they’re off it’s because they’re aiming too low, or in the rare case, too high, but I’ve actually seen them go right and left of center instead of up or down. Imagine being two inches left of the clit. Your ass should not be having sex if you’re two inches left of the clit. End of story.

So I was thinking maybe women would be a little more likely to jump in bed on the first date if you were a card-carrying member of the sexual community. You can be like, “baby I’m licensed”. And then she’ll know that you took the test, and you looked at the little diagram, and on the test where it showed a girls business, you were able to point it out.

And you were like, “A) sheathed in the hood directly below and centered to the pubic bone.”

And this shit should apply to women too. There can be a question like,

And, yes, maybe it’s a little eugenic-y, because if they can’t pass the sex test then they can’t have sex and that will put a huge damper on their procreation, but for christsakes, if they can’t take care of their partners in the bedroom, how the hell are they gonna take care of kids?

But then I started worrying about how my sex test might become unfair to certain groups, because it wouldn’t just be all anatomy and technique. I’d want to make sure myths were dispelled. Like, for example, one of my sex questions would be:

What does god hate?

a) gays
b) premarital sex
c) A and B
d) There is no god, you dumbfuck

And I’m sure you can see what would happen here. A lot of religious conservatives would be singled out. Especially if I throw out any trick questions and make abstinence one of the multiple-choice answers. Or what if I made them define legitimate rape? There go elected Republican men. Honestly I can’t imagine they’d answer all that many questions right now matter how easy we lobbed them… We’d be god and elephant free in a generation.

And then there are other questions that might profile would-be criminals, which is a little Orwellian, but I think if we’re making you get licensed to have sex then we’re probably already firmly in the territory of what one might consider to be Orwellian, so it’s a moot point… Anyhoo, one of the questions could possibly be:

a) wait until she passes out and stops saying it
b) or knock her out.
c) No
d) Depends on the context

And then the other problem is sex can be such a cultural thing. Like, what if I presented the clit question to those dark parts of the world that still practice female circumcision.

The question would say, “where’s the clit?”

And there would have to be an option E) in the dumpster.

And you know one of the things at DMV that I saw that I think may have contributed to the failure rate was the test anxiety. There were all these little sixteen-year-old High School kids with sweaty hands and they seemed like they were positively about to just shit stain themselves, and I’m sure test anxiety would probably come up the same way during these sex tests for some people. But then I started thinking, Jesus guys, if you get anxiety over this, just wait til you get to the real thing, and especially this generation, these girls watching the kind of porn they’ve been watching since they were, what, fifteen (I mean 18, of course)? You know what these girls are expecting? Buy some supplements. Maybe a cock ring. This anxiety is nothing compared to what you’re up against in the real world.

What am I allowed to control:

If you get this one you pass.