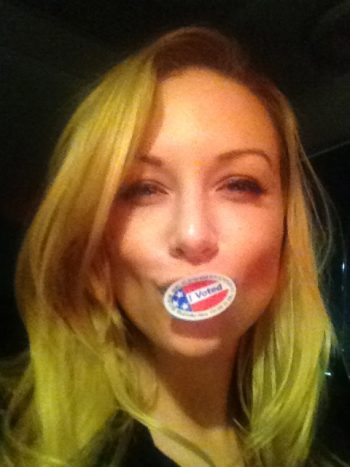 And I’ll assume from here forward that anyone reading has whacked it to my porn, or at least taken a quick glimpse, and not whacked it. If the non-whacking is my fault, I apologize. Beside the point though, the whacking. Please notice—in a quick mental shuffle through the Rolodex of my porn—the conspicuous absence of condoms in my scenes. They are not there. I did condom scenes in my first movie, and that turned out to suck major monkey balls. The added friction the condoms caused over the course of the shoot was ridiculous. The condoms were not a birth control measure. They were, theoretically, an STD protection. But all the performers were tested. So in my first movie I was protected from STDs that my coworkers didn’t have.

In the next movie I opted out of condoms, and have ever since. Six years I’ve been doing this with a perfect testing record. The system has worked for me.

And, yes. There is the recent bad business of this syphilis scare. One of our own faked his test and continued working knowing he had it. That’s shitty. We bungled that one bad. Shitty shitty shitty. Two people caught syphilis this way. With all the bungling. They had to take antibiotics.

And the industry reformed its testing measures to better control against this happening in the future.

In the wild, on average, there are around 2,150 new cases of HIV reported in Los Angeles County each year. This is possibly because there are a lot of people having sex with a lot of other people without verifying one another’s STD status. We are not those people. We’re verified. We are card-carrying motherfuckers.

You know about safe sex, right? Because you’re not twelve? Well just in case, here’s the long and short of it:

Sex is the biological function of procreation. As such, procreation sometimes happens. Condoms will help prevent that, as will birth control pills, spermicide, tube tying, and more extreme measures.

STDs are those diseases that are primarily transmitted via sex, although they are not limited to sexual transmission. The nature of communicable disease by definition requires it to be shared between organisms. It must be communicated—by blood or by semen, by air, by skin-to-skin contact, by snot or by spit or by tears—by something. So yeah, sex will bring a person in contact with a lot of these things. All of them, if you’re an avid deepthroater. Sex is messy and in your face. It’s arguably the only acceptable way to interact with two ends of a digestive system that isn’t your own without a medical license. But yeah, condoms will prevent some communicable diseases with 85% accuracy if you use them exactly right. Having sex with people who have been medically verified as not infected with sexually communicable diseases will also prevent this. So will abstinence. Your best bet, though, is agoraphobia.

So now you know that condoms are an option in safe sex. You are a responsible adult. You will make your choices from here.

But we are not responsible adults, obviously. Because Measure B would like to make the choice for us.

No. Disease ends with us. Maybe we’re doing the local population a small favor. Because we, for the most part, have an open and honest line of communication about STDs. STDs don’t carry the stigma for us that the general population associates with them. We talk about it. We’re on the frontlines and it is in our economic interest to stay disease free, not to mention we’re vain about our genitalia. Most STDs are silent. That means that for the most part people don’t know they have gonorrhea or chlamydia. HIV takes a while to manifest. Stage 1 syphilis is a single painless bump. The general population only knows there is something up if there are symptoms, and even then, they don’t always do anything about it. They definitely don’t go stick a godforsaken needle in their arm every fifteen days even though needles give them that scary-sinky feeling they get on the rides at Six Flags that drop too fast. Or again, maybe that’s just me. But anyhoo, in the general population, STDs travel silently. We porn performers are the variables that light them up. If one of us contracts an STD from one of you we catch it fast and we fix it fast and most of us then go back to you (not you-you, but the hypothetical sexual diseased person I am creating for this example. You know what I mean) and you, the hypothetical carrier, are alerted and told to fix it and then you, the hypothetical carrier, stop spreading it. See what just happened there? We are the end of the line.

Imagine if that one of our number who faked his test had just gone on in the real world instead. Not only would he have never tested, but it would have spread on silently, and those people who he spread it to would have spread it, and on and on, and then eventually someone would have had the sense to go to a doctor once Stage 2 flared up on his balls like one of Moses’ plagues. But that person who went to the doctor would have been so far removed from the original source, the incubation period being what it is, and the stigma being what it is, that the person would probably would have treated it silently and gone on with life, and the others would hopefully have done the same at some point, but not before infecting more people, or maybe they would never have treated it and just gone blind and insane. That is an option. Also known as Stage 3.

You’re probably reading this at work, right? If you’re paid hourly this math will be easier, but if you’re not, break it down. How many hours of your day today will be taken from you in the form of the cash you traded them for by the government. I mean taxes, of course. And then the government, being what it is, will reallocate your money, which is a tangible manifestation of your hours of your life that you traded doing what hopefully you love, but very likely don’t love. Some of the reallocation will be nice. Roads and schools and people not holding you up with machetes and taking your lunch money on the way home from work. These are good things. But some things… some things are not good things. Some things get your money by running a propaganda-driven campaign that the government buys into and then funds (with your money).

Like what is happening with AHF (AIDs Healthcare Foundation). AHF is the force behind Measure B. They are a non-profit foundation that possibly doesn’t profit because profits are diverted to Michael Weinstein in the form of a really ridiculous salary, plus perks. A salary to the tune of $366,096.00 as reported on his 2010 income taxes, to be exact (plus additional compensation that is hard to get a figure on). AHF will benefit greatly if this Measure passes. It is in their best interest. If it were in the interest of the performers it seeks to regulate, the performers would be the ones getting behind it.

And because a lot of performers are not behind it, Measure B has decided that it will cost California $300,000 (which is, to the budget’s credit, less than Michael Weinstein’s salary) annually to enforce it. That’s California, just to be clear. You know, the broke state. The one that already needs more dollars from you as it is. So under Measure B, they’d need to find dollars to send officers to porn sets to babysit, to watch hard dicks, specifically, to make sure, the whole time, that there is a latex barrier between the one willing adult participant and the other. Someone will be paid with your money to do this.

And there are people like me who agree with the Nevada thing. Where do their jobs go? Those people like me are people like you. They have families. Some have kids. They’re rooted in the cities they live in. They’re not all performers. They’re caterers and lighting crews and audio technicians and editors and PAs and producers and make-up artists and directors and agents and copywriters and receptionists and on and on. That’s a lot of fucking people with a lot of fucking jobs in this state in an industry where job security is precarious as it is. Piracy. Remember that? There was a worldwide recession, you may have noticed.

But if none of this appeals to your logos or your ethos, let me appeal to your pathos. Imagine yourself whacking it. Obviously I’d like to insert a case here re: why you should whack it to my porn but you can whack it to anything, almost. It is your imagination. So you’re whacking it, see. Maybe it’s the only free five minutes you get out of this day, because your kids are screaming and they need things and your wife needs things and your boss needs things and there is always traffic and emails piled up and taxes due and smaller bills and the dog needs a check up or maybe you do or maybe your grandmother does and the news is scary and you have dry cleaning to pick up, things to mail, a million petty endless errands and maybe today you’ll get them all done but tomorrow you’re going to wake up and start it all over again, and its been going like this for years, this adult life, and you have five fucking minutes to yourself. And you just want to whack it. So you’re tucked away in the bathroom stall or behind the closed door of your office or maybe you’re in your car parked behind an alley—you’re anywhere—and you have five minutes to whack it before the real world sinks its real world teeth in and pulls you back. And you start scrolling through the available porn and everything is condoms, fucking condoms everywhere with their hospital smell and their real world reminders and the funny bunching they do. You dig deeper. You’re looking for a scene with your favorite chick, or not—doesn’t have to be a chick and doesn’t have to be your favorite, it’s your call—so you’re looking for one scene you can really enjoy in your five fucking minutes of reprieve. But you don’t find it. Your five little minutes of pure selfish happiness, your you time, is slightly diminished by this. Imagine that. The real world creeping in on that last bit of sacred space.

Vote No on Measure B.

—This message brought to you by a girl who would like to maintain autonomy over her vagina.