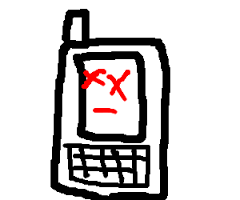 I don’t blog much lately because the work involved in getting to the point these days is so intensive that I choose not to, ever–get to the point–and it seems so much harder to form a good rant these days. In a hot bright flash I feel I could hit a subject smack in the face, and then then I sit down and come around to the end of an idea that I can’t wrap up because surely there’s a better way to have arrived there. More construction might bolster the argument. A good closing sentence should feel like a punch.

The fact is I’m tired. I need a recharge. Honestly it felt good to lose my phone–which I did last night, but not before I drowned it. Seventy-one unread messages at last glance and four inboxes that I mostly avoid. Plus all of my call history is red. The fact is I constantly look for little places to leave it and there are plenty to go around. One more voice disconnected from a face and I might just shut the thing down completely. That’s always the threat anyway. But then I find myself needing it–for navigation, for time. Occasionally a phone is a light to read by. But to communicate? No. I’m caught up in that generation that learned to communicate in the open. I grew up in a place where phones were connected to walls and people agreed to meet at landmarks in public places. I can’t quite shake it off. So when I tossed the phone yesterday into a plastic bag that was hauling the things we’d acquired—the show souvenirs and the playbook and the bottled waters and ticket stubs—it wasn’t really anything to me that the water cap twisted open and we lost it all. What is it we say? That these things happen? There’s not much else that applies quite as hopelessly and resignedly as this. How has it better been said? Shit happens. And then I lost it, walking around there shaking the water out from the crevices, the piece colder than I’d ever felt it before. Technical little corpse. I must have set it somewhere, or let it slip. But wouldn’t we have heard a phone clattering on pavement, sober as we were, unexcitable? What’s the difference with a piece like that, dead in the water? All I keep remembering is that I learned how to talk into a handset twirling the cord around my thumb.

And now the situation of today has come around to the simple crushing pressure just to move. To get out and do something. Walk the dog. Buy a phone. I thought maybe I’ll feel useful if I blogged about it all. I used to cry if I was stuck inside on a Saturday. Cry if the blinds were ever closed against the daylight. Cry if there were too many days straight of weather good enough to keep me from taking a break. My favorite days are grey and wet when I am sick. I like not having a phone, not walking a dog, not feeling like updating a blog is a task to be successfully crossed off. What I need is for some real plausible and agreeable reason to shut down under a blanket and shut off. I need not to have to explain it–need for the world to look at the circumstances too and arrive at the same conclusion, back me up, come to the same strong closing thought that spits necessity into the cause.

But the sun is out, as it has been. My phone is a drown victim sitting some place in yesterday. The dog is old enough to know how to put her will on a thing, wrap me around her like a cord. And the blog. You could say it’s done. What that means is that now I’ll feel the need to throw off the blankets and do the next thing, though at the same time some part of me will still be here, obsessing over how there were a million ways I could have ended a blog better than this.