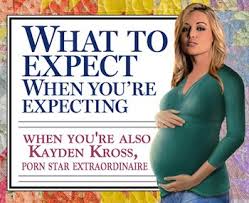 Cliches are generally tired descriptions because they’re accurate and this was the closest I’d ever been to what you’d call a sea of a people; every man with a camera like some cell floating alongside the next camera-head and the next and the next. The crowd that year was like a great undulating surface of thinning hair and baseball caps beneath which we may never know the depths. They thought I was someone because I stood behind a booth and had a headshot. They swarmed. Never before or since have that many people paid attention to me at once.

It was in October of 2006 that I finally did my first boy/girl scene under contract with Vivid. That scene was with Manuel Ferrara, who I am practically married to, but not legally, despite what the gossip sites may say.

Here’s why: the real wages paid to female performers have steadily decreased. This is true across the board. Jenna Jameson wrote in her book that when she entered her contract with Wicked in the early 90’s she signed on at $6,000/movie. That was good money for the 90’s. The boilerplate contracts handed out to girls still paid roughly the same though ten years later, and when I came in, and even for a few years after. Today that rate is considered a raise after the first year of performance on a boilerplate contract for a new performer entering the industry. One of today’s dollars was worth $1.62 back in 1993. So if we’re doing simple math, first year contracts back then were roughly equivalent to $9,720/film today. That would be a monthly salary before any other streams of income were added in.

I have a better knowledge of contract pay than I do of independent pay, which would make sense to you if you knew I’ve only ever been under contract. I do know that the benchmark $1,000/scene that independent girls try to charge has been the same rate for at least 15 years. In 1998 one of today’s dollars was worth $1.43… quick math: if real wages were equivalent then female performers entering the market should be making $1,430/scene today. I can count on one hand the number of top independent female performers I know of who can charge that amount or more. Those who can have paid their dues.

Sketchy math: independent performers entering the industry fifteen years ago at that rate would have had the option to take a booking every single day if they so chose. Performers of the same caliber today entering at the exact same rate can rarely garner more than a few bookings a week.

Shitty math: That rate fifteen years ago was for a straight up boy/girl scene without any bells and whistles. Nothing over-the-top and nothing extra. Girls used to hold off on their first anything. I remember I held off using a toy as a solo model. Couldn’t really tell you why, but I did. Then I took my time getting around to using a girl. Then a boy. I made a quick slip into anal and decided it wasn’t worth the anxiety and reined it back in at straight boy/girl sex scenes for years. I did one special movie that had a boy/boy/girl but, a) I was making residuals on that movie, and b) I’m the one who pulled the second guy in. It wasn’t exactly scheduled. On top of that I chose every single person I worked with every single time to the point of blatant redundancy. This was all great for me.

It’s not just the money and lighter work that’s gone. There was some illusion of grandeur at some point that has slowly eroded into web shows on the personal couch of the dude whose dick you’re sucking at a discount followed by your free evenings spent using social networks to throw in a little promotion of the day’s scene at no extra charge. This is not how porn was painted or how it’s being promised to girls coming in. The picture of the thick scripts and the big sets with the catering and the wardrobe and the CGI is something like what a lot of us came in believing. I know I did. And it’s still there, marginally. But there’s no guarantee a new performer will make it to that set, and if she does it won’t be the norm. The norm will be some dude’s personal couch.

But the economy, the economy, they say. Yes it’s turning up but no a college degree won’t guarantee much unless you hit one of the great letters of the STEM acronym—science/technology/engineering/math. So, unless you’re left brained. I am not. I’d rather stare at my computer screen and make the sounds of words with certain syllable counts come together in just the right ways. I went to school for psychology because at the time I was supposed to declare a major I had the most units racked up under that. My big goal was to get a degree, not to actually do something with it. I didn’t know what I wanted to do. So when Hustler offered me a contract out of the blue all I saw was jet-setting and adoration and enough money to feed my horse habit. It’s probably what most of us see, if you substitute horse habit for ___________. You can’t knock a job that pays $1,000/workday in this economy. Or in any economy, historically.

And it’s not that a small bit of the grandeur isn’t there anymore. It is to a lesser extent if you’re willing to put your body through more and you have fewer things to say no to. And if you require less payment in terms of real wages to do it.