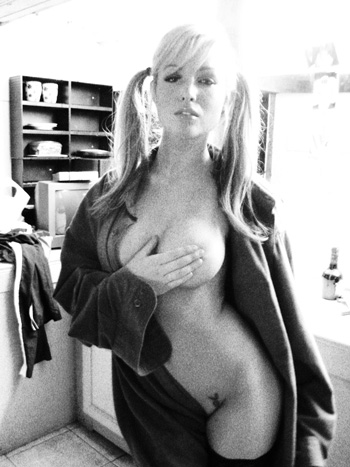 Well I’m sitting in the basement/feature room catching up on blogs and avoiding the dressing room because they made me judge the stripper Halloween costume contest and the ones who lost are not speaking to me. The ones who won are. You win some you lose some. Ha.

There was one blond stripper-cop who was super friendly all night. Annoyingly friendly. Pushy. She tried to make me lace up her outfit as they were calling me on stage. Then during the costume contest she tried to rape me until she didn’t win and hasn’t made eye contact since. I feel used. It was a battle of wills though. Even if she’d had the best costume I wouldn’t have given her the award because I don’t like being seduced by people who don’t want to fuck me. It feels like trickery and if I were a man in this club I would scream. I gave first to Little Bo Peep. She really went all out.

I also judged the customer costume contest. The man with the foil hat and end of days sign won hands down. His back said “ask me about fiat currency” with a bible verse written on the side. It doesn’t get much better than that. Speaking of good costumes, there wasn’t much to do today so my roadie and the club manager and I roamed the mall. It was mall-o-ween. The sign at the entrance said so. We determined that the best time to have a toddler is Halloween. There was one dressed as a skunk. His little skunk tail was taller than he was. There was a baby Nemo. There was a two year old pooh bear. And free candy everywhere. So not only were they as cute as they will ever be right then but they were all in extremely good moods. I pity the parents who get to deal with the sugar highs later.

Side note: my dog is Tigger this year.

And I’m a feature. So I don’t get to drink myself stupid in a slutty costume with bad lipstick somewhere in Hollywood but I can do it here in Albany minus the liquor abuse and subsequent hangover. That’s what they pay me for. I have to make a choice in the next fifteen minutes. I can be a nurse or a pirate or a French maid or a school girl or a flapper girl or a baseball player or a foot soldier or a sailor or batgirl. This is the last show of the night and the place died down after the contests so I don’t think it will matter too much what I choose. I just need to keep myself busy until the night is over so I can keep my mind off the random candy ready and waiting in quiet determination.