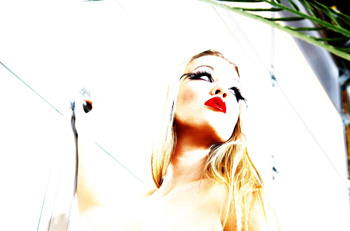 I’ve learned that I hate heavy make up. I don’t like feeling like I can’t touch my face or seeing color before I see features when I look in the mirror. It’s cool for pictures, but so are uncomfortable positions and improbable outfits. In person it’s a bit much.

Lately I’ve been on a light make up trend. I’m requesting it on set and resorting to lip gloss and tinted lotion at home. It’s given me a glimpse of how guys live: you get out of the shower, you dry off, you put on clothes, you go. How novel.

But tonight I screwed up. It’s been awhile since I put on fake lashes and it seems as if I’ve forgotten how. I tried to cover up one mistake with another and it turned into one very bad downward spiral to which I can promise there would have been no end had the club manager not shown up to take me to the feature. Now I’m in a dark club and it actually works with the black eye liner. Go figure.