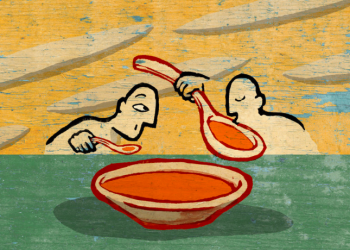 I’m at Starbuck’s again, not drinking coffee because I like to throw multiple resolutions against the wall to see what sticks and this one has. I am nursing a giant tea though. It’s like going from chewing tobacco to cigarettes I think—a slightly less horrible way to feed the same addiction.

I’m sitting outside trying to get a clear enough idea of how to do the math on annuities placed at the beginning and end of the year, on present and future valuation, on compounding and discounting interest (quarterly to annually), and honestly, I get it in theory but I hate to read numbers. I have a built in defense mechanism that allows me to come out of a math related textbook unchanged. The midterm is in two weeks with no finance calculator and I can see the whole situation not ending well.

So of course I’m staring at the page but the only thing I’m comprehending is the drifting conversation from everyone around me. Everyone is talking about the economy. The guy at the next table can’t get a job, or a girlfriend, and his church is hypocritical, but he’s still a young stud and he doesn’t get it. These are his words, not mine. I’m assuming he’s an out of work actor because one job thought he would be a perfect rapist but never called back. He laughs hollowly and denies being a rapist (he really does look like a rapist). He’s calling in favors from friends and with each call it’s the same thing—Jesus is amazing, he’s so amazing—P.S. I’m homeless can you help.

It doesn’t help that one group of 3 sat down at my table and won’t stop using their ‘outside voices’. They’re talking about income tax rising in CA, about double taxation and the unconstitutionality of it. They’re talking about getting divorced and putting houses in children’s names to beat the system. And they’re predicting a cash economy. They say this is the shit we revolted over in the first place, they want to know how America has come to this when we were founded on it’s antithesis.

They’re saying this latest bailout package is a catastrophe. They’re talking about caste systems and how in Russia the middle class were eliminated first as a tactical move to create class warfare before they struck down the rich and put their own in. The woman mentions India, where “Slumdog Millionaires” did nothing for the children in it. The producers bought them a house to move them up and they were photographed last week on the same block, same dumpster. The common thread is class warfare and they think we’re setting ourselves up for it.

I want to close the finance book and jump in on this. I haven’t turned the page in 30 minutes so they must know I’m already an active listener in this exchange. These people are doctors and lawyers. Wrong or right, they must have taken an intelligent path to the conclusion and I want to know more, but instead I’m pretending to do homework while I blog about them and eavesdrop.