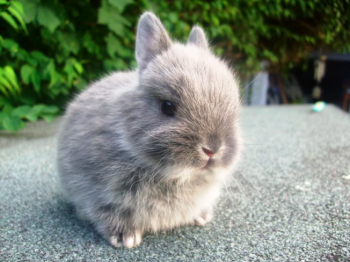 My inability to stand by and watch the fate of animals go south when I have the power to stop it has gotten me in a lot of trouble. There was the pony when I was 18 that was on it’s way to the slaughter auction… the one that I started stripping for. We all know how that ended. There have been dogs and cats and fish and mice and lizards and and a few horses and even a goat.

Now there are two rabbits on my desk. One is making it hard to type. The other is going to find himself back on the street if he doesn’t stop chewing on my mouse cord. Combined they can fill the space of one of my palms.

Oh yeah. And there’s a fish.

OK the story: I was walking around downtown LA when I passed a petstore I had never seen before. It had a bunch of homing pigeons in cages outside of the door and since this is not a typical LA petstore export I got curious enough to go inside. The place was crammed with dirty tanks and cages that were all overcrowded. Baby chicks were crammed together on the floor. A few were missing legs or eyes. It made me a little homicidal. I turned to leave and saw a dead fish hanging out on the bottom of an empty tank. It still had the rocks in it and just enough water that half of the fish’s body was submerged. I tapped the glass. The fish wriggled. I got the salesguy involved.

He tapped the glass. The fish wriggled again. He said it was fine and tried to walk off. I said no, it was not fine. I want the fish. He tried to point me towards a different fish tank and I said no. I want that fish. Now.

So he sold me the fish.

Now I’m walking around downtown LA with a fish in a bag. The fish clearly doesn’t know what to make of me. I don’t know what to make of the fish. We confound each other. I keep walking and trying to get the petstore out of my head but it’s too late. The mission has set in. So I turned around and bought two more fish. I figured I couldn’t take them all but for these three fish, I’ve changed the world.

So now I’m walking around downtown LA with 3 fish in a bag. I make it to the fashion district (the original intention). I’m too pissed to shop. I turn a corner and bam: bunny peddlers. It’s late in the day and two are left. They can’t be more than 5 weeks old. They’re sitting in direct sun with no food or water (not that they necessarily need it considering they should still be nursing part time). I shifted my rescued fish to one arm and angrily mentioned this to the woman swinging them around in bird cages. She didn’t seem to be surprised or affected by this information. I told her I wanted them both. She was happy to oblige and I had to barter their prices down to the last dollar I had in my wallet. The fish and their supplies had eaten up the rest of my cash.

So now I’m walking around downtown LA with 3 fish and 2 baby rabbits and no cash. At this point the shopping partner tells me I’m not allowed to tour downtown anymore, probably because it looked like there was a box of puppies up ahead.

Fast forward two days and I have all the makings of a petstore on my desk (One just pooped. He’s on time out.). Fish number one is indifferent. FIsh number two didn’t make it. Fish number three is acting like every meal is his last. Both of the bunnies seem to be fine. They’ve been especially active since they were given access to water. Funny how that works. And now the process of finding them homes begins.