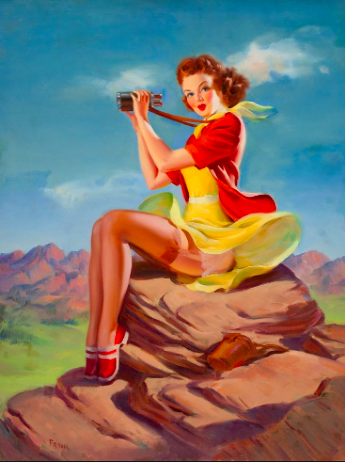 The Paper: It’s called a Biosocial Observation. This damn thing has been the bane of my existence. I’ve been looking for a kid for two weeks now for this paper. Nothing too specific, just one under 30 months that I can stare at for an hour, preferably under the radar. It sounds bad, I know. That’s when I realized there are no kids around me–none in my extended family, none of my friends have kids, there are none in my neighborhood. Or, if there are, their parents have been hiding them from me. I really looked–I put time and effort into it. I scouted. You’d think with all of the celebrity procreation going on there would be more copycat trendy single moms wandering around with a pre-baby body and a testimony about the spiritual joy of motherhood. I’ve been visiting restaurants, malls. This age group is sparse.

Well I did it again today at Starbuck’s as the deadline stared me down–scouted for children. I sat there again, just waiting, pad and pen alert. I was ready to pounce. I was a panther. One kid came in with a rattle and a pacifier and I thought I’d struck gold but he was gone as soon as the coffee was poured. I waited a little longer. I twittered about stalking children. I quietly reminded myself that I was only doing it because I was told to, but then I reminded myself that the Nazi soldiers said the same thing and we need to take responsibility for our actions. Then I reminded myself that I really wanted an A in the class.

Then I saw one from across the room sit down innocently with her mother. It was noon in a coffee shop and they were having lunch. She was clearly older than thirty months but I was out of options. I picked up my laptop case, my purse, my coffee, my textbook, and my notepad and awkwardly lugged my haul to the table next to them. I made myself comfortable, then looked up to find the mother looking back at me suspiciously. It felt slimy.

So the three of us settled into a routine that went like this: girl does something, I write something, mother gets nervous. Girl breaks cracker into two pieces, I write “the child breaks a cracker into two pieces, plays with the crumbs in a pincer grasp, demonstrating fine motor development”, the mother tries to read what I’m writing and then looks at me suspiciously. Then the girl points at something, I document her pointing at something, “demonstrating her ability to use perspective”. The mother looks at me and my pad again. I try to play it off like I’m drawing a picture… the child hides a cracker behind her back, demonstrates object permanence, I start to write… and the mother picks her up and leaves. She casts the look of death over her shoulder. The child cries, demonstrating her ability to pick up on social cues and her mother’s fear. Or her dissatisfaction with leaving her chocolate milk behind.

So I left Starbuck’s and made the rest of the paper up. I think I’ll shower.