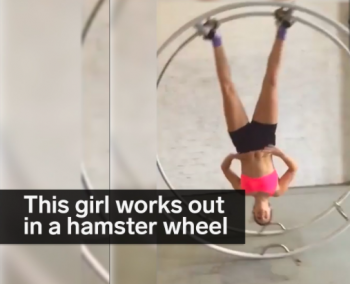 The cashier is just doing her job but I wonder if she realizes how ridiculous the question is. “Do you want chips and a soda with that to make it a meal?” No dear. I don’t. I’ll be incomplete without fried starch and aspartame but I’ll have to make do.

I’m not always this health conscious. It depends on what time of the day you catch me. I’m actually drinking diet coke as I type. I’m using it to wash down a cookie. But the Subway question is still absurd and the personal difference for me is that right now I’m sitting on set and when I was at Subway six hours ago I had just come from the gym. The painful work-out memories have about a five-hour half-life. They kick in right around minute three on the treadmill when I’ve burnt ten calories and realize the only thing I’ve compensated for thus far is a tic-tac. By the time the trainer is making me squat and catch 12 lb. weighted balls between sprints I’m usually convinced I may never go near chocolate again. I hate chocolate. It is a dark and horrible thing, just like the ball that is being chucked at me and the mat he’s making me touch my boobs to with each push up rep and the padded thing he makes me kick. He tells me to get him back. Kick him harder. I tell him it doesn’t count if he’s going to block my kicks with padding. I’m not going all out if it’s not going to hurt him as much as it hurts me.

“OK now show me the pink”

“cheat it towards me”

And that’s why I have a limber lower back.

But despite my only impressive gym feat being my ability to touch my nipples to the back of my knees without feeling any pain on the warm up mat, I continue on at the gym. For awhile I had the trainer believing that when I was sprawled out like a ragdoll on the floor I was only relaxing the overstressed muscles in my limber back, but he caught on when I started to doze off. Now I get no breaks. He’s a slave driver. He gets off on lactic acid. Sometimes he even texts to make sure I’m feeling it later. Then he sends a follow up text to make sure I don’t have a cookie in my hand. Sometimes I lie. It’s for his own good.

I wonder at times where I would be if I did the gym but not the cookies. Science and popular opinion seems to support the idea that I would be in better shape but when you’ve been sitting on set for hours with nothing to do but babysit the bakery tray it’s easy to remind yourself that you’ll be back in the gym tomorrow, and so it goes for months on end. This is how I maintain.