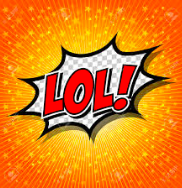 I hate lol. Visually it’s like nails on a chalkboard. When I read it I want to reach through my screen and wipe it away. I want an edit button for it, or one of those little blurry boxes. Digital white out.

Rofl isn’t as prevalent so it doesn’t activate my OCD in the same way. Ttyl seems outdated and is therefore not a threat to me. I can’t even comprehend these new emotional outburst acronyms that are longer than four characters in length, aside from, of course, lololololol–which naturally makes me want to stab things. I can handle brb, but I think only because I know exactly one person who uses it, and he uses it with extreme wit, sarcasm, and caution. This formula makes anything okay.

I have small but acute internal meltdowns that I feel peer pressure to mask when people actually verbalize lol in conversation. Lies. When you say lol to me in my physical presence you are not, in fact, lol-ing. In fact I suspect that when you type lol you are not laughing out loud at me even then. I suspect you’re looking at your screen with the same expressionless straight face or slight smirk that I am, because facial expressions are only used in the presence of others, because they are a form of visual communication with other life forms that actually have to see you to get it.

But I’m starting to get it. It doesn’t bother me any less, I’m just rationalizing it better. Especially lately when I say things on twitter that are not meant to be taken literally, but are, and before I know it I have people who don’t get the reference asking where they can send flowers and get well soon cards and whether I’ve designated a next of kin. My rabbit is my next of kin. There.

But I’m committing the same crime with smiley faces. People say I do them backwards, like this:

To be honest I don’t think it’s possible to smile backwards. I think that’s called a frown. I do my frowns like this:

These frowns and smiles are my go-to response as I answer emails. They are code for many things, such as “I don’t speak your language” or “I don’t want to answer your question” or “I do not want to commit myself to your opinion or get into an argument with you over it” or “I can’t tell whether that’s rhetorical”. Mostly I find myself adding them to the end of almost everything I say as an insurance policy against being taken literally.

That’s just the problem with written language across the distance of the web though. All of the subtleties of visual cues and intonation are stripped away and next thing you know what you intended as the most awesome joke of the century has been grossly misinterpreted as serial killer tendencies and so on. Compound that with the language and cultural barriers you run into as you respond to people all over the world in real time and the emotional distress becomes immeasurable, as with the islander who took me seriously when I suggested we elope in Canada and hunt moose for sustenance.

So that’s where I am on Friday night–sitting at home rationalizing pop culture acronyms (which, to my horror, I discovered all have Wikipedia pages), and taking it a step further as I grapple with whether I can actually use them. I know I should out of compassion for the poor souls I’ve unwittingly fucked with, but I’m going with the slippery slope argument on this one and I’m afraid of where opening this floodgate of intolerable methods of communication might take me. I tried it on. I practiced saying lol in the mirror. I don’t wear it right. It’s like the first time I cussed in 6th grade and everyone laughed instead of taking my middle-school outburst seriously. I really meant it when I finally said the F-word. So what if I stuttered.