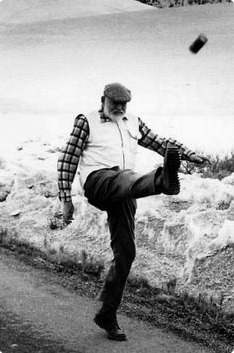 It’s the hangovers. I get them when I take Advil PM and I get them when I smoke a hookah and I get them every single time I drink without fail. I drink often enough. Social situations breed cosmopolitans and my job consists mostly of social situations lately. And I do like cosmos. I was in Vegas last week for Adultcon. The first night I had a few drinks. A few means three. I didn’t finish two of them. I woke up with my head pounding and didn’t touch alcohol for the rest of that trip.

From there I went to New Orleans. Of all the cities in the world to give up alcohol I think New Orleans was the most trying one I could have chosen. The city is a coy and drunken tease. But I did it. Kinda. I did it until the last night when I was forced to order a Hurricane from a famous bar. I had to try it he said. I’d get to keep the glass, he said. Grow a pair, he said. And so I ordered the Hurricane while dueling pianos playing ominously in the background.

Thirty minutes later I’d worked a half inch off the top of that nine inch glass. I was done. We dumped out the rest and boxed up my souvenir I-drank-in-New-Orleans-and-here-is-my-proof glass. Four hours later my alarm went off. As I packed for the airport, I cursed hurricanes and cosmos and all things alcoholic and once again. My head pounds. So this time, really, I”m giving up the drink.