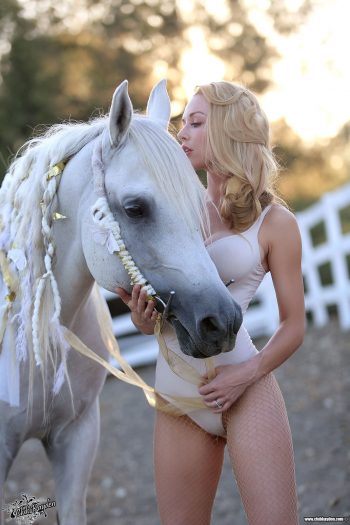 I wish a blog talking about how I rode my horse today could be an original angle for me. I would write the shit out of that. But it’s not. Ballpark guess says at least fifty percent of my blogs feature my horse in some way large or small. And that’s taking it easy, because more than fifty percent of my days feature him.

I rode him today through Griffith Park and I noticed a coyote following us. Except he wasn’t so much following as creeping, from which I think any reasonable person would agree it would follow that he was not so much tagging along as hunting us. This dawned on me somewhere overlooking the five freeway, high up. The weather is nicer there and the ambient light from the city doesn’t quite hit it at night. Everyone down and around Burbank felt like there had been some small victory of the underdog when a mountain lion was spotted up there last month. Just one. Which is sad because he was probably pushed into the territory from habitat encroachment further north. How he crossed the freeway is something people want to think about.

So this coyote—when it occurred to me that I was being hunted I laughed. He did not seem to be the brightest of coyotes, thinking he would take down a horse that from his perspective probably appeared to be a centaur. What kind of coyote fucks with mythological creatures, and by himself no less? Then I was sad for the coyote. Because coyotes are devoted spouses and they mate for life, and if his wife wasn’t around she was probably dead. Probably saw the mountain lion cross and thought she’d try it herself. They were the top of the food chain until the recent business of this mountain lion. I’m sure the coyotes feel there is something to prove.

But then I wondered if maybe his wife didn’t get hit on the freeway. I don’t know what else kills coyotes in such a protected area. I thought maybe she starved. That didn’t seem right though. We got rain this year and everything turned green and now the hills are slowly browning like they do but it’s nothing out of the ordinary. There are ground squirrels and rabbits darting across everything, freeways included. The LA river has three inches of water rushing in a straight path over it’s cement bed at all times. The ducks don’t so much swim across it as walk. But that is what we have made normal. So the coyotes shouldn’t starve.

My effort in logical problem solving failed to pick up much speed until the end, at which point I wondered how sane a lone coyote hunting a centaur in the broad daylight might be. I thought about possible factors contributing to coyote insanity. I thought about rabies, which might also explain the missing wife. I turned around and rode home. I did not do it like you’re supposed to with predators in the wild. You know, where you look as big as you can and back away calmly, preferably maybe armed with a rifle in the event that push comes to shove, or at least with a big stick, which I’ve heard in almost one case prevented a fatal bear attack, the stick.

Rifles seem to be better for these things.

So instead of backing away calmly, we ran. We did this without a saddle, like always. I wear thick jeans and then I run him up a steep hill to get the sweat going and then I stick like a bur. The thing about these jeans though is that when the fabric is thick, so is the seam. It rubs hard and rough on the skin and I’ve never had the sense to wear more than a thong, if that, so the friction will leave one long straight red line down the middle of my ass, always just barely landing to the side of one cheek or the other. I don’t mind it. But you might. So next time there’s a red line down my ass, that’s what happened, minus the incident-specific detail of the probably-not-actually-rabid coyote.