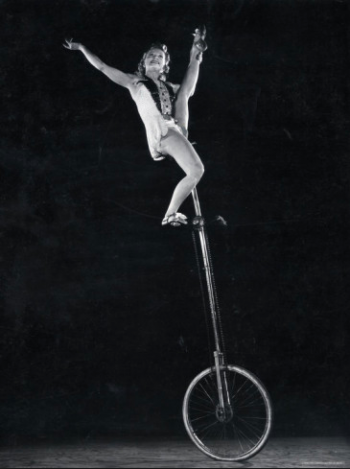 If we’re being perfectly honest, I worried the other day that the last emotion I might feel before sudden death would be inappropriate, the way people still concerned with their sexual allure might worry that a bus will hit them on the wrong day of the week and a late night morgue worker will declothe them to find that they were wearing Sunday’s underwear—the white ones pulled from the back of the drawer, slack in the elastic, stained in the crotch, undignified—though they’d seemed a wholly appropriate means of getting through laundry day when the stakes were low.

I’m worried that the emotion will be one of low stakes, and then I will be dead.

This is how I came to worry about it: I was driving a vehicle with a high center of balance, expired tags, two maintenance lights on the dash, and oxidation in the paint. It was a windy road. On a sharp turn where another car was stopped just in front I was forced to stop too. I’d been speeding. Of course one can’t get up to any great speeds on this road, but physics is just a matter of great enough with the case of any given quantity. This car sits high and the turn was tight. I felt that.

Also, the tires might be bald, but the weather was nice.

I was wearing very fine lingerie.

And through the day, of course, there were great and grave concerns. The news cycle, for example, might have been one of them. There is almost surely famine in a handful of underdeveloped countries. There is war and threat of war. I have mortgages and a partner and a mother and a daughter. Russian planes are flying too close to Alaska, to American ships. Other Americans feel shut out by the U.S.A.’s designation of their citizens as such—maybe not the Canadians, but further south.

Point is, there were larger things than the preoccupations I had outside of some nice woman’s anus. For example, I’d concerned myself with drinking water in place of eating, and there was bad cell service. So in light of that I worried about how many inches my waist measured, circumferentially, and whether my website was sending out social media updates every third hour of daylight. That is the rule, as a minimum, beginning at 9am local time.

But coming back to the story: it was six pm and a social media update was due—had been due. I was driving this strange car precariously and reflecting on how I’d only put out one update and we missed the morning rush, the lunchtime one, I was beginning to feel not entirely satisfied with what the company had to say at 3pm.

Of course, there is no particular reason to think that rear ending another car would have flipped my own, but somehow the nature of this vehicle I was driving constantly keeps me on my toes re: which end might be up at a given time. I feel that if something were to go wrong with this car—be it a dead battery or an empty gas tank or a sharp turn or the statistically likely case of a rear end collision—I would immediately find myself upside down, tits at my chest, posture well improved as a result of my new relationship with both gravity and that frayed seatbelt.

Too, the contents of my set bag would be strewn everywhere, testament to my own collided life. There would be two books—one practical, the other a novel—one fingerprint-smeared laptop with a yellow legal pad shoved in its fold (filled with porn notes, budgets, scribbles of writing, grocery lists), an alphabetical gym lock whose combination is the background imperative I’ve put on my daily existence—write—a smaller bag of mostly unused make up, a baby spoon, three forms of government issued IDs, a check issued for talent services, pH balanced water, a sweatshirt (provocatively expensive, looks cheap—culturally on point), two Disney-branded figurines, and three varieties of lotion, because each delivers a progressively stronger moisture kick than the last, and if anything is more unstable than my daily wavering anxieties, it is our climate.

And so I thought, with my foot slammed on the brake and my mind still half-concerned with how rampantly unacknowledged the wrong tweet might be for the company, I thought, oh, of course this car is going to flip now, and I will be left dangling helplessly in this shitty car, a pornographic sitting duck, and I will miss the tweet that should have gone out at the traffic peak, or, worse, I will send out something half-assed in my frazzled state, thereby greatly decreasing my current standing in not only the physical universe, but the digital one as well.

And then I thought that that would be my last thought before the next car came around the corner and slammed into my stopped car too. What a paltry thought to go out on.

The truth is that I am not hazily paying attention to the generality of famine and war in underdeveloped countries. I know pointedly that it exists, and where, and am familiar, like many of you, with the image of the toddler washed up on that Turkish beach. I read today that the Assad regime is suspected of using a crematorium to handle the volume of bodies that are being executed at a military detention center. In fact I read the article three times over, curled up in my large bed, in my safe neighborhood, safely distanced from it as I weighed the discomfort of that thought against the discomfort of the spice level of the Thai food I’d reheated—on a stove as opposed to a microwave so as to preserve the nutrients.

The truth is the news cycle has probably contributed to the reason you’re reading this blog. See, this blog is not 70% comprised of conflicted and disturbing Trump stories, nor did it make the cut of the remaining 30% that every other celebrity and world issue is currently jockeying for. It’s not making you feel that everything is ending and hilariously so. It’s not misleading you with a title like “Mysterious Sea Creature Washes Ashore in Indonesia” only to tell you deeper in the text that the creature was actually only the badly decomposed carcass of a Baleen whale. It is not news pretending to be news because it hangs on your click. And in turn, your click is not feeding its machine. This blog is reading that has opted out of the cycle, and—maybe more importantly—is low-grade reading at that. It’s not going to threaten the way you see your existence. It’s not coming to your shore. It won’t make you question the authenticity of the breadth of information you must consult in making even your most basic decisions each day.

It’s just a story about a girl with fake tits who had a chance brush with death and saw the whole tawdry scene flash before her very eyes, only to think, briefly, how sad it would have been to be that disengaged from anything that mattered at such a monumental moment, followed by a partial hope that perhaps the awareness of such would have lent some sort of dignity by proxy, at least.