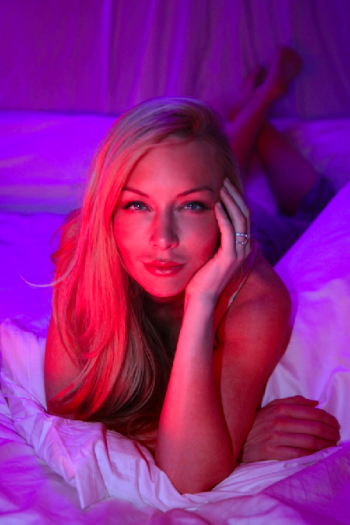 Have you ever shaved your nether regions only to learn, the hard way, that shaving such parts can leave you looking like a plucked turkey with a lush case of hives? The camera dislikes this. For this reason, many of the more sensitive-skinned nymphs of porn have perfected the X-region shave: With a fresh blade, you simply pull the skin back so that the hair stands straight, and then shave downwards in the direction of the hair growth. Pat the area dry and smother the affected region with a healthy dose of Hydrocortisone cream. Your nether regions will look prepubescent in no time!

Are you as overwhelmed as I am when you walk into an adult novelty store only to be confronted by aisle upon aisle of pricey lubes? What flavors really matter? Which ones won’t ball up and make embarrassing little nodules on your junk once they start to dry? When is “warming” lube too warm? What if you choose the wrong stuff and send your partner into anaphylactic shock? More importantly, why is it all so expensive?! Well, the pros in adult films have bypassed this problem completely. Where spit is not enough, they simply employ a small helping of coconut oil. Not only does coconut oil make the skin silky soft, but it never balls up or otherwise turn into embarrassing by-product. Moreover, porn blanket lint doesn’t stick to it, and it is not offensive to any of the five senses. Plus, the likelihood of ingestion means only one thing: you’ve added some essential fatty acids to your diet today. Congratulations, you sexy health nut.

Bottled water might seem like another obvious choice if you’re talking about things for drinking. After all, the tap water in Los Angeles is not exactly mountain fresh. But we’re not talking about drinking, in this case. We’re talking about vaginal rinsing. Vaginas typically don’t need any rinsing, per se. They are self-cleaning wonders of nature and, as such, the feminine douche you may have seen in so many supermarket aisles is pretty much a load of crap. If anything, the solution in feminine douches will often worsen the case of a vagina. Vaginas are special flowers that have a perfect balance of good and bad bacteria under perfect conditions. The solution in feminine douches can upset that balance. But, cameras, you see. The tidy porn actress likes to polish up her parts just before she shoves an extra tight HD lens up there. The best tool for such polishing is the bottle sold in the feminine douche. Remember, though, that the solution is bad. As so is the tap water in Los Angeles. For this reason, many porn starlets will dump out the solution in the douche bottles and replace it with bottled water. A quick rinse of the parts and they’re off to the daily grind.

Like lemons, baking soda is a ridiculously common grocery item that has uses ranging from baking needs to natural cleansers. Also like lemons, baking soda is an ideal natural aid for helping the porn performer stay on top. Both men and women in adult films expose sensitive areas of their bodies to a lot of foreign people and substances. This can upset the natural balance of one’s body, and result in pH imbalances. Many, many symptoms of pH imbalances across the body can be corrected by mixing a few teaspoons of baking soda into a cup of water and guzzling it quickly. It tastes like hell, but results are noticeable in a matter of hours. Plus, it’s not as gross as Monistat.

Okay, maybe this isn’t a common object in your household, but in the household of a male porn performer, it is. Why? Because sometimes you just really need to override nature. Sometimes your body’s schedule isn’t on board with your porn schedule. Frankly, sometimes a dick just isn’t feeling it. Yes, it goes against all of evolution, a situation like this. One imagines that a perfectly healthy, fit male would, without fail, always rise to the occasion when placed in front of a young, willing, nubile female performer. But some days, he just doesn’t. There are, after all, many more men on the set with him than women. The days are long. The food sometimes only consists of gummy bears and bottled water stolen from the set box. Sometimes the girl just kills the dream. Maybe she’s killed the fantasy by mentioning her participation in any number of today’s listed activities. Maybe she killed the fantasy by not engaging in a few of today’s activities, or showers for that matter. It’s hard to know. But some men, when caught with their limp dicks in their hands, choose to fix the problem with an injection of something called Caverject. Also known as embalming fluid. Happy Fapping!